Orange Day is the twenty-fifth day of each month, when the people of the world are asked to come together to wear some orange garment or article of clothing to remember the campaign of UN Women: Say NO to gender violence. 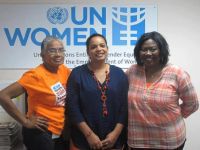 "The UN Secretary-General's campaign UNiTE to End Violence against Women has proclaimed 25th of every month as Orange Day. It's a simple action that everyone can take - wear something orange - a t-shirt, a scarf, a tie, a dress, accessories or your traditional outfit - and talk about the issue with people you know and on social media" (*).

To commemorate the day and remember the cause, UN Women is asking supporters to spread the word so that humankind takes up the challenge to fight against gender violence. The advice is as follows (*):

Check out some photographs from last month's Orange Day action and get inspired! If you are taking action this month, don't forget to let us know - post your photograph on facebook.com/sayno.unite, or tweet it to @SayNO_UNiTE using the hashtag #orangeday.

If you are hearing about Orange Day for the first time, here are some tips on how to take action:

Wear Orange on the 25th of each month and invite others to do the same!

Use and share the UNiTE Ribbon as a symbol for preventing and ending violence against women and girls.