Say NO to gender violence

Three million girls a year in Africa are submitted to female genital mutilation; 100 to 140 million women and girls live with the scars of this practice; 60 million children a year are forced to make commitments in marriage ceremonies; 80% of human trafficking is committed against women and girls 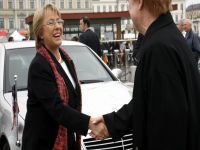 Each Year on 12 August, the United Nations celebrates the International Youth Day. This year's theme is "Building a Better World: Partnering with Youth".

At Say NO - UNiTE, we believe that youth everywhere are critical agents of change, and achieving gender equality and ending violence against girls and women is at the heart of realizing human rights and development of young people.

We want to know what you think about these topics. How does gender equality and ending violence against girls and women matter to youth employment, education, political inclusion and realization of human rights of all young people?

Join us for a conversation on Facebook and Twitter using the hashtag #IYD2012 on Monday, 6 August and Tuesday, 7 August. Check out this page for more information: http://saynotoviolence.org/join-say-no/international-youth-day-2012

Your inputs will feed into the online discussions organized by the United Nations on the occasion of the International Youth Day. In a series of six Google+ Hangouts, from 8 August to 10 August, the UN is asking young people around the world to share their views and priorities on the following topics: employment; entrepreneurship; education, including on sexual and reproductive health; political inclusion; citizenship; and protection of human rights.

Let's make sure that what you think about youth priorities, gender equality and ending violence against girls and women  stay on top of the UN's agenda.