The city of Timbuktu, Mali, capital of the province of Timbuktu, has long been famous among citizens of western countries as a place far, far away, a mystical city...but it exists, it is a cultural treasure, it is UNESCO world heritage...or at least it was. Today, its 700-year-old treasures are under attack. 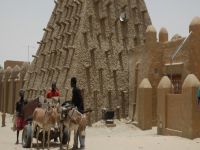 Centre of Islamic culture from the 13th to the 17th centuries, the city of Timbuktu was host to around 700,000 unique manuscripts on law, science, literature and religion, letters between rulers on subjects on a huge variety of subjects. It was an important hub for the spread of Islam throughout Africa and is classified by UNESCO as a world heritage site because of its three great mosques Djingareyber, Sankore and Sidi Yahia, sixteen cemeteries and numerous mausoleums. It has the Koranic Sankore University, it had madrassahs and it has, or had, thousands of priceless objects.

Today all this is under threat as Islamists systematically set about destroying the buildings and selling the objects, much as western thieves did in Iraq after the 2003 illegal invasion, as priceless artefacts were allegedly shipped back to White House cronies and sold around the world on the black market under the nose of NATO.

Amid fighting between Malian government forces and Tuareg rebels, there are reports that the Mausoleums of Sidi Mahmoud, Sidi Moctar and Alpha Moya have been destroyed, which provoked Irina Bokova, the Director-General of UN Educational, Scientific and Cultural Organization (UNESCO) to issue a statement expressing her distress: "There is no justification for such wanton destruction and I call on all parties engaged in the conflict to stop these terrible and irreversible acts, to exercise their responsibility and protect this invaluable cultural heritage for future generations."

The Government of Mali has requested that the World Heritage Committee place Timbuktu on the UNESCO List of World Heritage in Danger, which has been accepted at a meeting in St. Petersburg, Russian Federation.

The tombs were apparently attacked by militants from the Ansar Dine Islamist group, which is reported to have links to Al-Qaeda. The Ansar Dine, Salafists, have claimed that the sites, shrines of Sufi Moslems, are idolatrous and claim they will impose Sharia law in the region after having driven out a rival group of Tuareg separatists.