May 15th marks 25 years since the first launch of the world's most powerful booster rocket Energia. The rocket is capable of delivering more than 100 tons of cargo into space. However, some experts say that such projects as Energia became a huge burden for the Soviet economy and caused considerable damage to it, not to mention the national space industry. They also say that such super expensive projects undermined the power of the Soviet space industry and sucked the industry dry before the collapse of the country. 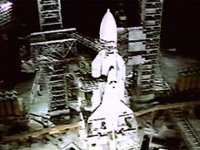 Other experts say that Energia was like a cart put before the horse. The rocket became the project that was running too far ahead its time. The Soviet super heavy booster rocket developed by Energia Industrial Association was one of the world's most powerful space vehicles at the time when it was created. The rocket was built as a universal space vehicle to execute a variety of tasks.

The giant rocket was supposed to be used as a carrier for space shuttle Buran, as well as for manned and unmanned missions to the Moon and Mars. The list of goals, for which Energia was built, also included the launch of new generation of orbital stations, super heavy geostationary satellite platforms, the transportation of heavy military cargoes, etc.

The works within the scope of Energia-Buran program started in 1976. On May 15, 1987, Energia blasted off for its first test flight. On November 15, 1988, the rocket flew into space as a part of the Buran space complex. Energia has not made any other flight afterwards for one simple reason. For the time being, there are no objects in space that would need to be serviced by the giant rocket.

Indeed, there were only two flights that the giant rocket had made. The works on the Energia-Buran program were suspended in the beginning of the 1990s. There were five Energia rockets staying at Baikonur spaceport in Kazakhstan at the time when the program was scrapped in 1993. Two of them had been stored (unfuelled) before 2002 at the spaceport. The rockets became the property of Kazakhstan (Baikonur was the Soviet spaceport which Kazakhstan obtained into ownership after the collapse of the USSR). The rockets were destroyed on May 12, 2002 after the collapse of the roof of the assembly building.

Three other rockets were left unfinished at Energia Industrial Association (currently Rocket and Space Corporation Energia). Afterwards, the unfinished rockets were destroyed too. It is still possible to find the fragments of the world's most powerful rocket in the backyard of the company.

Georgy Grechko, a cosmonaut and a hero of the USSR, said in an interview with Pravda.Ru that Energia was a very interesting rocket.

"The rocket was very interesting indeed. It was a universal rocket - one could mount additional side blocks to it. It was therefore possible to launch up to 100 tons of cargo into space. The volume of the cargo could be decreased too. The design of the rocket made it possible to launch a variety of cargoes on its board. It could be either a lunar rover, or Shuttle Buran. One could equip the rocket with different blocks to solve different goals.

"The rocket was a dream of academician Valentin Luzhkov. He once said: "We'll make the rocket that no one else can make in the world ever." One could use Energia to fly to the Moon and to Mars and anywhere else. The legendary flight of Space Shuttle Buran took place owing to that rocket. I attended the landing of the spacecraft, and I was shocked to see that the spaceship landed with precision of up to half a meter. All the calculations were perfect, the flight was impeccable. It was, indeed, the greatest achievement, which ruined the Soviet space industry, though.

"There was no scientific basis in the country during those years, which could be used to match the capacity of the rocket. The rocket was supposed to be loaded with scientific equipment, but the country didn't have that equipment. That was a bright example of senselessness, when hardware dominated science.

"One should always create something to execute a certain goal. As far as Energia is concerned - there was no such goal. There was only one - we wanted to prove it to the Americans that we could do everything automatically at the time when they were flying their manned shuttles."