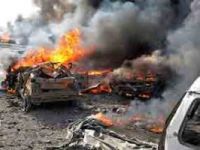 More than 40 people died and 170 were injured on Thursday (10th) after the explosion of two car bombs on the highway south of Damascus, official sources reported.  The blasts occurred at 7:50 (local time) in a densely populated area, where almost at midday the authorities were still collecting human remains from the rubble.

The explosions coincided with the departure of workers from their jobs and students from their schools and universities, and in a time when the region was a dense displacement of cars, buses, taxis and people.

The blasts raised two balls of smoke that could be seen in different parts of the city. The action was described as ugly and vandalism by residents, who expressed their rejection of such acts.

Instead, Prensa Latina noted, there is a crater two meters in depth and more than five meters square, opened by the detonations, and human remains were still scattered throughout the area, surrounded by several burned and charred cars.

The attack apparently was directed against the building that houses offices of the Patrol Headquarters on the central avenue, even though the main victims were civilians.

Images shown on Syrian television were charred bodies, human remains, women and children dead because of vandalism done, whose dimensions are difficult to describe with words.

The facades of businesses and houses a hundred yards around where the explosion occurred were also damaged by the shock wave.

Hundreds of people went to the scene of  improvised demonstrations and condemned such actions, calling them a criminal, barbaric, and blaming the United States, Al Qaeda, the Gulf nations and Western countries of being behind the acts.  According to experts, the acts have the stamp of the terrorist network founded by Osama bin Laden.

The head of the UN Observer Mission in Syria, General Robert Mood, accompanied by a delegation of international observers, visited the area and called out all those who are behind these attacks, whether from inside or outside of Syria, that precaution are being taken so that they cannot cause more suffering.

Mood demanded that such acts cease and their perpetrators grant an opportunity for the Syrians to move towards a peaceful political settlement of the crisis.

He stressed that his team is on the ground in Syria and with the Syrian people, and it should not be considered that these attacks are to transmit a message to his mission and the international community.