More than 50 UN observers are already in Syria 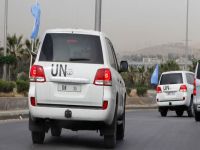 More than 50 UN observers are in different parts of Syria to monitor compliance with the plan of the special envoy, Kofi Annan, Norwegian General, Robert Mood, head of the group said on Thursday (3rd).

The military said that its main purpose is to oversee an end to violence by all parties and to ensure the success of the Annan mission to resolve the crisis in Syria.

Mood added that after a coordination meeting with the governor of Hama, who his team consults to determine the landmarks of the monitoring and documentation of all that is observed and seen, they are not limited to just listening to the news, he told the news agency, SANA.

Team members are deployed in the provinces of Damascus, Homs, Aleppo, Hama, Idleb and Deraa, and among its tasks is to send daily reports to the UN based on its direct examination of the events on the ground.

In carrying out its work, the observers will meet with the population to achieve a transparent criteria and see the reality of things, to achieve an objective approach, argued Mood.

The Syrian governor of Hama assured them that he will give all facilities to experts to succeed in their work, and achieve an accurate and objective assessment of what happens in the country.

Meanwhile, U.S. media outlets reflect on the increase in activities of the Al-Qaeda and extremist groups in Syria, many of them that Washington includes in the classification of terrorists.

The daily The Wall Street Journal noted that the terrorist bombings of the previous Monday in Damascus and Idleb revived fears about the growing presence of extremist groups in Syria, especially the Al-Qaida organization.

The paper stresses that this poses difficulties for the implementation of the Annan plan to stop violence.

Likewise the British daily The Independent in a commentary entitled "Al-Qaida opens new front in the Middle East," argued that the terrorist attacks of recent days in Idleb, have the seal of that organization, something ratified by the U.S. Central Intelligence Agency ( CIA).

The author of the comment, Patrick Cockburn, drew attention to the relationship between Al Qaeda and Saudi Arabia, that the Syrians see as their enemies because of their strong relations with Iran.

He said that Saudi Arabia and Qatar are very important elements for the future of Islamic fundamentalism under the name of Al-Qaeda and other extremist organizations of similar ideology.