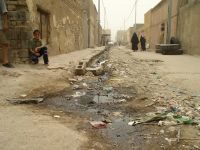 "Their wives run round like banshees.  Their children sing the blues

If destabilization, duplicity, insurgency and mass murder could surprise yet again, with the blame of the victim adding to the "shock and awe," after Libya, Syria would certainly be a case in point.

America's decades long plan ( i ,ii) for another puppet government and quasi client state status for the country is well underway. Any observer of the shenanigans within the US Embassy in Damascus would be forgiven for mistaking it for a covert operations centre rather than a seat of diplomacy.(iii)

Of course no plan for a country's ruination is complete without the help of the UN. Think Libya and Resolution 1973, the green light for a "humanitarian" blizkrieg, regime change, razed towns, murder from air and ground on an industrial scale, including that of most of the country's leading family, including small grand children and the allerged butchering of Colonel Quaddafi, the country's sovereign leader.

Who then, better to be appointed "Peace Envoy" to Libya than Kofi Annan, former UN Secretary General (1997-2006), who silently acquiesced to the average deaths of 6,000 children a month in Iraq from "embargo-related causes," throughout the hundred and nineteen months of his tenure, bowing to the US-UK driven UN embargo.

Inevitably, for his silence, the man who one diplomat described to this publication as, "like Pontious Pilate, he washes his hands," was awarded the Nobel Peace Prize in 2001, jointly with the UN, for amongst other delusional rubbish, his "emphasizing its obligations as with regard to human rights."

The UN's Baghdad cabal, with its fine restaurant and barbecue parties, ensconced at the Canal Hotel, at Iraq's expense, were in a perfect position to visit these sites, record and account. They never bothered.

That was yesterday. Apart from Annan, the UN has another weapon for Syria:  UN diplomats' wives.

The wives of the German and British Ambassadors to the UN, Frau Huberta Voss-Wittig and Lady Sheila Lyall Grant, have released a video appeal and an online petition to President Assad's wife, Syria's First Lady, Asma al Assad. A performance of skin crawling, patronizing, head patting, treacled trash, which reflects nothing but the UN's duplicity and its representatives privileged, reality- removed lives in its ivory tower.(v)

The "initiative", the pampered pair stress, is entirely independent, theirs alone, and nothing to do with their husbands.

Frau Voss-Wittig's involvement, it might be surmised, lies in, "The German 'no' to the US about Iraq," in 2002.(vi) "Historically this was the deepest ever division between the White House and any post-cold-war German Chancellor."

Additionally, in August 2002, Germany and France agreed the "Declaration of Schwerin," named for the German town where their representatives had a working dinner, resolving that they, "had to oppose the war ... and that they had to do it in public and as forcefully as possible," an overt collision course with the US and UK.

Only when Angela Merkel took office were links tentatively repaired formally, but "shock-waves" remained. Two wives have clearly taken delivery of bricks and tools and set about erecting bridges, never mind demolishing those of others.

Sheila Lyall Grant is the wife of Sir Mark Lyall Grant, former political Director General of the UK Foreign and Commonwealth Office, a post with wide responsibilities including for Iraq, 2007-2009 and also line manager of post-invasion UK Ambassadors to Iraq.

He was senior policy adviser to the Foreign Secretary on various strategic Foreign Office priorities regarding Iraq, in which capacity he attended major European, G8, UN, OSCE and NATO meetings.

Sir Mark clearly went through the Foreign and Commonwealth Office's rigorous and scrupulous selection process as to suitability for key posts:

However, "It naturally fell to the Foreign Office to look at where Britain's long-term strategic interests were in Iraq and in the wider region ..."

The Iraq priority for Sir Mark had been " a strong economy."

Whilst: "Abidance of human rights and better social conditions, better social delivery to the people (were) highly desirable, I don't say it is absolutely essential in the near future," he told the Inquiry. (Emphasis mine.) "Let them rot," comes to mind.

Given that Nuri al Maliki's Iraq is now firmly allied with Iran, and a disaster on every level, with economy, health, malnutrition and social conditions worse than the embargo years, it might be though that the Foreign Office and Sir Mark would think twice before stepping aside, as his "independent" wife became another regional unguided missile.

The wives' petition, which is pretty much the same as their toe curling video reads, in part:

Hundreds of Syrian children have already been killed or injured. One day, our children will ask us what we have done to stop this bloodshed. What will your answer be, Asma? That you, Asma had no choice?

Every single child had a name and a family. Their lives will never be the same again.Asma, when you kiss your own children goodnight, another mother will find the place next to her empty.

Lady Lyall Grant, has been a diplomat since 1980. Her most recent post was Head of VIP Visits at the Protocol Directorate in the heart of government, Whitehall.

Clearly her induction course in protocol did not include instructions on how to address the wife of a Head of  State.

Incidentally, Sir Mark apparently cares as little about the UN as he did Iraq. Asked at the Inquiry about the current role of the UN in Iraq, he replied that they were no longer there, after the bombing of their building in, he hesitated, then, " 2005, was it?"

The bombing of the Canal Hotel, which killed seventeen, including the Head of Mission, Sergio de Mello, and injured scores, was on 19th August 2003.

Corrected by the Chairman, Sir Mark responded, "2003, was it? I apologise," apparently as sanguine about his colleagues being blown to bits as in assessing that basic provisions to sustain Iraqi lives were not "absolutely essential."

Now, for Syria, in a  crisis so clearly manipulated from without, as Kofi Annan rachets up the number of "UN Observers" from ten to three hundred - surely as Iraq, many will be meddlers, spies and worse. Sheila Lyall Grant writes, "One day, our children will ask us what we have done to stop this bloodshed." Every child "had a family and a name."

The child victims of Afghanistan, decimated by the invasion also had names - but the Taliban was blamed. As did their small counterparts in Iraq since that illegal takeover.  The 4,5 million orphans, 600.000 of whom live on the streets, are still somehow the fault of Saddam Hussein - and their traumatized little global siblings in Libya are still somehow the fault of Colonel Quaddafi, who brought the country the best welfare and highest living standard in Africa.

Perhaps the diplomatic duo have not noticed that Syria, generous host country to two million Iraqis, fleeing their "liberation" now have their own nationals fleeing in fear, over the border to Jordan, Syrians now joining the near similar number of Iraqis there, now refugees themselves. Iraqis in Syria have no where to run.

The ladies have seemingly also missed the media coverage of senior, experienced Al Jazeera journalists, who have walked away from their livilihood in protest and disgust at the media distortion and manipulation of Syria's plight, the portrayal, of course, that all blame lies with President al Assad.

Further, "peace envoy," Kofi Annan, has already let slip that both he and the truce monitors, "should help pave the way for a much needed political process," presumably he means with those insurgents with foreign passports. Read: "Regime change."

And no planned destruction, overthrow and general catastrophe would be complete without hidden weaponry and hardware with which the leader "oppresses his own people." Syria, they say is hiding tanks and weapons in government compounds.

The media faithfully repeats the mantra. None seem to have mentioned that one of the "peace envoy's" stipulations, to which Bashir al Assad agreed, was to take tanks and weapons off the streets. Where rebel violence is such that government troops are not forced to respond, they have been withdrawn - back to government compounds. Mr Annan, seemingly has not thought to point this out.

China's Ambassador, Li Baodong, seems to be watching more closely than most. He expressed the hope that, "the Supervision Mission will fully respect Syria's sovereignty and dignity, act in strict accordance with the authorization of the Security Council, adhere to the principles of neutrality and impartiality ..."(vi.) Quite.

If Lady Lyall Grant cares about children, which could equally be her children, she should ponder on, and tell her humanity-deficient husband of just one, which represents the trauma of every child, in every street, in every country targeted by an unholy Western alliance - and the UN.

It is an Iraqi boy of about five, in an orphanage, asleep. He has drawn a huge picture, depicting his mother, on the floor, her arms outstretched. He is curled up on it. Every night he goes to sleep the same way, on the floor, between her arms.

Well past time for the powerful to grow the hell up. Those children could be your children,