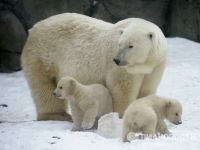 The three polar bears cubs who were born in November, are already the biggest attraction of the Moscow Zoo. They still have no names. Only now are they old enough to venture into open areas of the zoo. Until recently, they seemed to prefer staying inside their den.

But they have now ventured into the snow for the first time to play with their mother in public view.

This is a first for the breeding program of the Moscow Zoo, that a female gave birth to three cubs at once. Their handlers have failed to discover the sex of each, but the three are already among the most popular attractions at the zoo.

Polar bears live mostly in the Arctic Circle and were classified as endangered in some parts of the world.

When ice forms over the ocean in cold weather, many polar bears, except pregnant females, head out onto the ice to hunt seals. When the warm weather causes the ice to melt, polar bears move back on shore.

Polar bears are the world's largest land carnivore and also the largest bear, An adult male weighs around 350-680 kilograms (770-1,500 pounds), while an adult female is about half that size. Although it is closely related to the brown bear, many of its body characteristics are adapted for cold temperatures, for moving across snow, ice, and open water, and for hunting the seals which make up most of its diet.

The scientific name is Ursus maritimus, Latin for 'maritime bear' due to the animal's native habitat.