More than half of Israelis are against attacking Iran, says survey 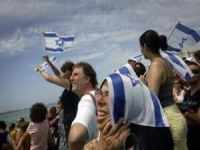 A survey by the Ha'aretz newspaper pointed out that more than half of Israelis oppose an attack on Iran. According to the poll of the country, 58% of the respondents did not support military action against Iran, even after growing tension between the two countries in recent months.

The perception of those interviewed in the survey is that the country should not take the first step if the United States, an ally of Israel, does not intercede militarily against Iran. Israel has been examining the possibility of launching an attack - called "preventive" by the government - against Tehran's nuclear facilities.

On Monday (5th), thr Prime Minister of Israel, Benjamin Netanyahu, said the country has the right to defend itself against the threat, he said, represented the Persian country. The prime minister also said that "time is running out for Iran."

"Israel hoped diplomacy would work, waited for sanctions to work. None of us can wait much longer. As prime minister, I will never let my people live in the shadow of annihilation," Netanyahu said during a meeting with U.S. President, Barack Obama.

The Israelis accuse the Iranians of developing their nuclear program for military purposes, bringing danger to the Jewish state. Iran denies the accusations and constantly reiterates that their program does not attempt to produce nuclear bombs.

Nevertheless, both the European community and the U.S. in recent months have passed tough sanctions aimed at forcing the Iranians to discuss the issue and expose details about their nuclear program.

Last Tuesday (6th), the head of EU foreign policy, Catherine Ashton, said that they would resume dialogue with the Iranians about their nuclear production. The upcoming meeting, however, has no date scheduled as of yet.

Further research, which will be published in its entirety on Friday (9th) also shows an important advance in the polls for the right-wing Likud, led by Netanyahu. If the election were held today, the party would get 37 seats, compared to the 27 that they have now, while the opposition centrist Kadima would lose their current 28 to retain only 10 or 12.

In addition, more than half of the respondents said they trust Netanyahu and Defense Minister Ehud Barak, to deal with the Iranian issue.