Syria introducing reforms even the most diehard opposition should support 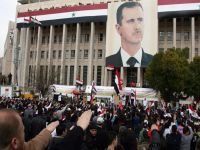 Some 14,600,000 Syrians are able to participate in Sunday's referendum on the 26th in which a new draft constitution will be submitted for the approval of the population, said the Deputy Minister of the Interior for Civil Affairs, General Hassan Jalali.

The highlight of Jalali's press statements was that 13,000 schools and 835 classrooms will have voting stations installed, including at border crossings and airports, to facilitate that everyone can exercise their right to vote.

He explained that the election will be overseen by a central committee to be chaired by Interior Minister and his two vice-ministers.

A new Constitution is the cornerstone of a comprehensive reform package that President Bashar al-Assad offers since it will legitimize the creation of other new parties - seven have already been authorized, as well as the separation of state powers, the conduct of elections and decentralization of local governments, among others.

The draft constitution envisages that the state system is based on political pluralism and that power is exercised through the democratic vote, and defines the functions and independence in their activities in the government: executive, judicial and legislative.

Among other proposals, the bill stipulates that the President henceforth be elected by universal and secret elections every seven years and can only aspire to one second term, as candidates above 40 years have to register with the Supreme Court and have the written support of at least 35 National Assembly deputies.

Legislators also will be elected in national elections for four year terms.

It also provides that the society will be based on solidarity and respect for the principles of social justice, freedom, equality and preservation of the human dignity of each individual, and that citizens have equal rights and duties without discrimination on the grounds of sex, origin, language, religion or creed.

The State will also ensure the freedom of the press, printing and publications, as well as the independence of the media in accordance with the law governing this sector.

Similarly, the State must provide women all the opportunities that enable them to contribute fully and effectively in political, economic, social and cultural life, and work to eliminate the restrictions that prevent their participation in building the community.

Idiotic lockstep ziofascist media is calling these measures both a mockery or laughable. I think anyone seeing the exact provisions detailed here can determine for themselves that the ones who are laughable and making a mokery of themselves are the ziofasct media and the fascist imperialists they blindly serve, regurgitating such utter stupidity and lies.  But they will go ahead, ship in more terrorists to kill people, drain their entire economies to do so, stomp their feet that Assad must go, and above all call the other side unreasonable while it is they who are being entirely unreasonable.