The west, Turkey and the UN are terrorist supporters

Who are you? What are you? The recent UN condemnations against Syria raise the question: Does the western media or the UN even ask that of whoever these people are that are telling wild stories about events in Syria? No, they don't. They just promote them as they present themselves (for example claiming to be Syrian soldiers defecting because they refuse to kill civilians). 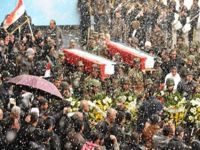 Even the Qatari propaganda organ, Al-Jazeera, has finally admitted that the opposition has lied and exaggerated about casualties and protest numbers.

The latest scene was on the Syria-Turkey border where terrorists are being trained, armed and funded...then placed into Syria to perform their murderous deeds. Perhaps the western media and the UN should ask these clowns how many civilians they have killed in terrorist acts.

What better proof would anyone need that terrorists are targeting the Syrian government than the fact that hundreds of Libyan rebels, commanded by the admitted Al Qaeda operative in Libya, Abdulhakim Belhadj, a jihadist who fought with the Taliban against U.S. troops in Afghanistan, were airlifted into Syria to aid the opposition in carrying out attacks against government forces?

These actions are fundamental and serious steps to address the people's demands. However, this isn't discouraging the west and their terrorist stooges who falsely present themselves as supporting or fighting for "freedom and democracy in Syria" and for the interests of the Syrian people.

So do these "rebels" and "freedom fighters" acknowledge the efforts at reform, do they think that perhaps they should or could negotiate or compromise or is it something else?

They would more properly be referred to as mercenaries and terrorists, working not for the interests of the Syrian people, who support President Assad overwhelmingly, but for foreign interests. They have been given instructions by their western sponsors not to negotiate with the Assad government under any circumstances.

Now why would the west give such instructions if this were a legitimate opposition? On the other hand, this deceptive statement was released:

"We still believe that a political solution is what's needed in Syria and there is still a chance for it if the international community acts quickly," White House spokesman Tommy Vietor said.

How can there be any sort of "political solution" when they have ordered the opposition not to negotiate under any circumstances with the Assad government?

It's rather obvious what's going on. These "opposition" individuals are playing a power game where they hope that the west will send foreign troops in to give them the "gift" of power and money.

Then Syria can be turned into a no man's land where no one is safe, just like they did to Libya with that NTC terrorist gang. And they would all be competing with each other, as in Libya, to see which gang of criminals will please and provide for western interests the best.

Interestingly, they don't even try to disguise their new stooges, who for the Syrian scenario are called the Syrian National Transitional Council, so confident are they of their media disinformation campaign. This self-appointed government in exile is based in Turkey.

Turkey's role in the anti-Syria campaign is obvious. Terrorist training camps have been set up in Turkey. Terrorist insurgents in Syria were trained and armed on Turkish territory to infiltrate into Syria as defectors from the Syrian army.

These armed marauders and invaders from Turkey, loosely calling themselves the "Syrian Free Army" claim to be "the only thing standing between the tanks and the civilians." But a closer look easily removes this cloud of deception and lies.

The SFA is operating throughout Syria, both in urban areas and in the countryside. Forces are active in the northwest (Idlib, Aleppo), the central region (Homs, Hama, and Rastan), the coast around Latakia, the south (Deraa and Houran), the east (Dayr al-Zawr, Abu Kamal), and the Damascus area. The largest concentration of these forces appears to be in the central region (Homs, Hama, and surrounding areas), with nine or more battalions active there.

They attack and set up incidents all through these areas, fire upon and draw out the army, as well as fire upon pro-government and other Syrian civilians. Then they scream in front of the cameras about "atrocities and human rights abuses."

It seems that as in Libya, the Syrian Army is expected to sit and fold its arms while people are murdered and personal and public property are destroyed. Smile and wave at the terrorists and do nothing.

One of the leaders of the "Syrian Free Army" has already promised the French Foreign Minister that if France intervenes, he will name his son after him.

The Syrian Free Army leaders have indicated that they will cut Syria's ties with Iran and with the Palestinian and Lebanese resistance movements once they are in a position of "power" in Syria.

Seven Turkish intelligence officers were arrested in Syria. They confessed that they have been trained in special assassinations, bombing and explosions operations by the Mossad in Israel.

Additionally, a month ago, 49 Turkish intelligence officers were arrested in Syria. Seven of them are high ranking officers of 'intelligence' services of Turkey.

A recent incident being fradulently reported by western media has that "Syrian" forces fired on a funeral. Interestingly, the funeral was for martyrs from among Syrian forces killed by terrorists, and the shooters were these so-called defectors, attempting to blame the incident on the Assad government once again and so it goes, one false flag after another, after another.

The hypocrite, Recep Tayyip Erdogan, said. "No regime can survive by killing or jailing. No one can build a future over the blood of the oppressed."

That's rich coming from the country that is responsible for the murders and terrorist activities in Syria and from the country that was built on a Genocide which they deny ro rhia day, against Armenian and Greek Christians who are the original inhabitants and owners of the land that comprises the artificially created entity known as "Turkey."

Turkey has long fancied resurrecting the Ottoman Empire, and cooperating with western garbage and their machinations goes hand in hand with this long sought after goal. It is also noteworthy that the re-establishment of the Ottoman Empire is also looked upon favorably by many zionists in Israel.

Turkey is even quite anxious to openly invade Syria if Ankara can receive the green light from Washington.

According to Michel Chossudovsky, "the road to Tehran goes through Damascus. A US-NATO sponsored war on Iran would involve, as a first step, a destabilization campaign ('regime change') including covert intelligence operations in support of rebel forces directed against the Syrian government."

Russia must consider Syria the ultimate, final line in the sand against western imperialism and global domination goals.

Dmitry Rogozin, who was Russia's representative to NATO, told reporters that an attack against Iran is the same as an attack against Russia. "Iran is our neighbor," Rogozin emphasized. "And if Iran is involved in any military action, it's a direct threat to our security. But at the same time, we believe that any country has the right to have what it needs to feel comfortable, including Iran."

Russia has taken a firm, principled stand on the situation in Syria and Iran. Working tirelessly to facilitate dialogue and discussion, the only stumbling block to such talks are the west and the "opposition" that hardly qualifies as being referred to as any sort of opposition.

I am reminded of one Obama campaign promise that won the admiration and respect of the world community. On July 24th, 2007. he was asked, "Would you be willing to meet separately, without precondition, during the first year of your administration, in Washington or anywhere else, with the leaders of Iran, Syria, Venezuela, Cuba and North Korea, in order to bridge the gap that divides our countries?"

Obama responded, "I would. And the reason is this, that the notion that somehow not talking to countries is punishment to them -- which has been the guiding diplomatic principle of this administration -- is ridiculous."

However, all of Iran's offers for talks have been beset with nothing but preconditions and demands, so Obama is nothing but a bald-faced liar, even worse than his predecessor because of it.