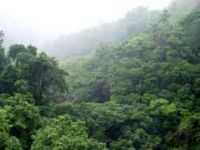 The fact that climate change, in combination with human action, has caused the disappearance of tropical forests in Central Africa over three thousand years, was published in the journal Science.

Forests play a role in mitigating climate change by trapping and storing carbon in their trees. Currently, the world's forests and forest soils store more than one trillion tons of carbon - twice the amount in the atmosphere. The African continent has accounted for 30% of the world's rainforests.

An analysis of the core of marine sediment at the mouth of the Congo River, showed at that time the influence of a strong chemical erosion existed, experts from the French Research Institute for Marine Exploratorium found.

This deterioration occurred when communities arrived that brought agricultural technologies and molten iron that is nowadays present in Cameroon and Nigeria.

A further exploitation of the Earth, together with climate change, aided the degradation process, the researchers indicated. By devastating the trees to obtain land for agriculture and smelting iron, these tribes facilitated the process of erosion that led to the disappearance of tropical forests in Central Africa.

On the positive side, Africa's forests might fare best in a changing world. Africa's climate is more varied than that of the Amazon or Southeast Asia over the past 10,000 years. As compared to the Amazon, African forests have less tree diversity, but the species of trees that exist are more resilient.