Iraq war criminals get away with murder

Iraq War Crimes: Haditha: Another Small Massacre - No One Guilty. 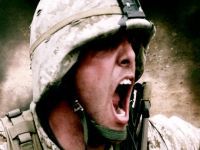 "We gather tonight knowing that this generation of heroes has made the United States safer and more respected around the world." (President Barack Obama, State of the Union address, 24th January 2012.)

On the 24th of January, the day President Obama delivered his last State of the Union speech to Congress before the election, citing the: "selflessness and teamwork of America's Armed Forces, (their) focus on the "mission at hand," the "selfless" Staff Sgt. Frank Wuterich, leader of the massacre at Haditha, in Iraq, became the seventh soldier to walk free - from the mass murder of twenty-four unarmed men, women and children, in three homes and a taxi.

It was another chilling, ruthless, cold blooded, up to five hour rampage, revenge for the death a colleague, in a roadside bomb - which had nothing to do with the rural families that paid the price.

The youngest to die was a one year old, the oldest was seventy-six years old, wheelchair-bound amputee, Abdul Hamid Hassan Ali. He died with nine rounds in the chest and abdomen.

On May 9th 2007, Sergeant Sanick De la Cruz received immunity from prosecution in return for testimony in which he said that he had watched Wuterich shoot five Iraqis attempting to surrender. He further stated that he and Wuterich had further fired into the dead bodies - and that he had urinated on one of the dead Iraqis.

"Imagine what we could accomplish if we followed their (US troops) example,"pondered the President in his speech - in a week in which worldwide revulsion was expressed at a video of Marines, allegedly with the 3rd Battalion, 2nd Marines from Camp Lejeune, North Carolina, urinating on dead bodies in Afghanistan.

It was, of course: "behaviour ... not in keeping with the values of the US Armed Forces ... not consistent with our core values (or) indicative of the character of the Marines in our Corps," said a Defence Department spokeswoman.(i).

Ross Caputi, a former Marine who took part in another massacre, in Falluja, exactly a year before Haditha, was sickened at what he saw and experienced, and now campaigns tirelessly for Iraq and for reparation for Falluja. He disputes the Defence Department's sunny view of "core values."

"These attitudes are common in the Marine Corps. The guys who peed on the poor dead Afghans were not 'bad apples', they were 'average Marines'," Caputi told this publication. For his outspokenness, Caputi has received such a volume of chilling and obscene threats from former colleagues and U.S. Service personnel (seen by the writer) that they stand testimony to his words.

As in Afghanistan, the litany of Iraq's blood-lettings are silent witness to the "core values" of an altogether different kind. In an expression disturbingly mirroring "cleansed," homes are "cleared." Grenades are thrown in and then troops storm in, automatic rifles (and more grenades) blazing.

A description of the assault on one Haditha home, from a Lt. William T. Kallop records:

"The Marines cleared it the way they had been trained to clear it, which is frags (grenades) first ... It was clear just by the looks of the room that frags went in and then the house was prepped and sprayed like, with a machine gun, and then they went in. And by the looks of it, they just ... they went in, cleared to room, everybody was down." (ii)

"Most of the shots ... were fired at such close range that they went through the bodies of the family members and plowed into walls or floors." (iii)

As Marjorie Cohn's meticulous, eye watering piece (see iii) points out, days after the mass murders at Haditha became public: "US forces killed eleven civilians, after rounding them up in a room in a house in Ishaqi," in Salahuddin Province. All were handcuffed (presumably not the six month old) and executed. They were:

"A report by the US military found no wrongdoing by the US soldiers," writes Professor Cohen.

There are Falluja's football fields of mass graves, Najav's hotel and hospital car parks, turned graveyards, the pathetic uncounted ones in gardens, in yards, the lost, buried in the family home, across Iraq, by families who would be also shot if they ventured with their beloved, to the cemetery.

In Falluja, reminiscent of other historic "cleansings," categorized war crimes, men between fifteen and fifty-five were forbidden to leave or enter their city.

Iraqi families shot in their cars by US service personnel are beyond counting - and indeed have not been: "It is not productive to count Iraqi deaths," as the inimitable General Kimmit reminded the world.

Deaths included the family of Ali Abbas, by rogue US missiles, in the residential Zafaraniya suburb of Baghdad, with its evocative Convent and ancient Catholic church. Ali lost his pregnant mother, father, brother and thirteen other family members. He also lost his arms. He was twelve years old.

Allegations of summary executions have emerged from Tel Afar, whose blood drenched toddler, her parents shot by troops in their car, remains a never to be erased image; Samarra, Quaim, Taal al Jal, Mukaradeeb, Hamdaniya, Ramadi, Tikrit, Mosul - and throughout the country.

In Mahmudiya, in 2008, fourteen year old Abeer Quasim Hamza, was gang raped then killed by five US servicemen - after they had murdered her mother, Fakriyah (34) father Qasim (45) and six year old sister. All were burned in an attempt to cover the crime. There were two convictions.

Long forgotten are the wedding and funeral massacres, a particular target for the US military, a litany. One, early in the invasion, was just a month after the first Falluja onslaught.

On the 19th of May 2004, forty-six people celebrating a wedding in Mugrideeb village were mowed down by assault helicopters, other attack planes and Marines.

USMC Major General James Mattis at the time simply commented: "How many people go to the middle of the desert to celebrate a wedding ...?" He later said that it had taken him thirty seconds to decide to attack.

Eman Khammas of Iraq Occupation Watch braved the dangerous road out to the village as soon as she heard. She found carnage - and remains of the musicians' instruments, decorations, pots, sacks of rice, improvised bread ovens, sacks filled with leftovers for the animals - all who had been shot - and surviving eyewitnesses.

"The ground was full of bullets holes of different sizes, spots of blood every where, some a meter wide. In some of them the remains of human flesh were drying in the sun. . . . In one of these remains, there was a long black lock still attached to the flesh. I could not see any more. I ran away back to the demolished house."

Those mown down, of the Rakaad Naif family, as they celebrated were:

Five from a family called Garaghool also died, thirteen of the band and three photographic crew. Forty-six, mown down for celebrating a wedding..

General Mark Kimmit, questioned on the liquidation of the party goers - the dead women's gold was also torn from their necks by the troops, according to consistent survivors accounts - simply replied: "Bad people have parties too." Asked about the near countless other acts of carnage, he responded:

As the cost in Iraqi lives at the hands of US troops briefly hits the headlines again, some of the names that are known, in the perhaps 1.7 million lost, should be remembered. They are not "collateral damage" or "regrettable incidents." Each one is a unique human being, often a small, fledgling one.

In Haditha the victims were:

15. One year old girl staying with the family.

Survived: Safa Younis Salim, 13, who pretended to be dead.

Taxi: Passengers were students at the Technical Institute in Saqlawiyah:

Lance Corporal Roel Ryan Briones, who, seemingly, was not involved, was ordered to photograph the bodies. He picked up a little girl, shot in the head. The contents of her small skull spilled out on to his trousers. "I need immediate help," he said.

What of help for then thirteen year old Safa, pretending to be dead amongst her family's bodies. Of Hiba, lone survivor of her home, and her now six year old daughter?

What of the heroic Taher Thabet al-Hadithi, young journalist and human rights activist, who filmed every minute, every bloody detail the following day, and amassed the truth of what had really happened, as the Defence Department was busy trying to cover their tracks? He fled to Syria in fear of his own life expectancy, should the US military learn of his evidence.

It was his witness materials that made their way into Time magazine, engendering an "inquiry." Evidence that was indisputable..

The reaction of Major General Steve Johnson, Commander of US Forces in the Province was salutary: "It happened all the time ... it was just the cost of doing business ..."

"The renewal of American leadership can be felt across the globe," said President Obama, concluding his address, citing : "... the enduring power of our moral example ... tyranny is no match for liberty."

On the wall of the deserted house of one of the Haditha families, silent witness to this "moral example," is written: "Democracy assassinated the family that was here."