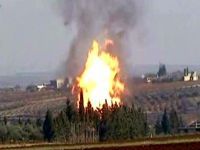 Adolph Hitler made a famous proclamation to his followers. He said to them, "Today all Germany is ours, tomorrow the world!" In the exact same fashion, American leadership follows in his footsteps.

However, it was George Bush who said, "You're either with us or against us!" Now this was purposely interpreted wrong to refer to the fake, contrived war against terrorism, but what he really meant is "either do what we want and what we tell you or we will destroy you." This is today's American empire.

The latest victim was Libya, now under siege by thousands upon thousands of foreign mercenaries and terrorists, one set of terrorists installed as a "government." However, this motley group is only able to function in the capacity of giving press conferences for the western Goebbels press. Otherwise, they can't do a damn thing in Libya because not only do they hate and kill each other, but the people of Libya hate them.

Now the Empire marches on to its next victims, emboldened by the lack of opposition from the impotent, divided world community. They are targeting Syria and Iran for the same treatment as they gave Libya.

Then the Iranians rebelled and overthrew the Shah. So now another war is being conducted against Iran, both overtly and covertly. The Jundallah terror organization, funded and supported by the Empire, is engaging in kidnappings, smuggling of drugs and violence.

There were the Twitter terrorists trying to overturn the elections by creating violence. There are the terrorist actions against Iranian military facilities. There was the cyberterrorist Stuxnet virus attacking Iranian nuclear reactors. There is the ongoing assassination of Iranian nuclear scientists.

There is no justification whatsoever for these assasinations, and they fool no one with their denials, trying to attribute these murders to "internal problems."

However, the propaganda campaign against Iran in regards to its nuclear program has been quite successful in fooling the gullible. Most uninformed citizens in the west believe that Iran is trying to produce nuclear weapons to use on "poor, innocent never did nothing to nobody Israel." After all, Ahmadinejad did say he was going to "wipe Israel off the map."

In fact, that was a purposeful mistranslation. Pravda readers should know that. What he really said was, "The Imam said that the regime in Israel will vanish from the pages of time." That does not mean, "We are building nuclear weapons to go out of our way to destroy you" (no matter how suicidal that would be) as Goebbels media would have you believe.

1. Search the pond slime and sewers in the victim country for criminals and greedy traitors who will sell out their country.  Promise them the moon, the stars and a huge bank account living in power and luxury.

2. Organize a demonization of the country and its leadership in the Goebbels media.

3. Call the target country's leader a dictator, no matter how many times you've been told that the people love him and/or he was elected.

4. Send in groups of terrorists, mercenaries and criminals to organize the local garbage against the government. Employ the latest technology with Twitter and Facebook.

5. Have their stooges attack peaceful citizens and blame it on the government of target country.

5. Have empire leaders and their stooges call for the leadership of target country to "step down."

6. Threaten and then organize a military attack.

7, Infer that the leader of the target country is crazy when he says that outside forces are trying to cause trouble.

Thus, they called Gaddafi "crazy" when he told people that Al Qaeda and terrorists were causing trouble in his country. As it turns out, the man was 100% correct, as the Al Qaeda, terrorist and criminal backgrounds of "rebel" leaders have been exposed.

So then they move on target Syria. It's the same pattern as in Libya. In his speech the other day, Assad said the following:

'External conspiring is no longer a secret because what is being plotted in the pal talk rooms has started to be clearly revealed before the eyes of the people. It is not possible anymore to deceive others except for those who do not want to listen or see; as the tears shed by the dealers of freedom and democracy for our own victims can no longer conceal the role they played in the bloodshed which they tried to use for their own purposes."

Assad is 100% correct, as was Gaddafi. However, speaking on behalf of the Empire, Hillary Clinton used the Goebbels nonsense as previously:

"Instead of taking responsibility Syrian President Bashar al-Assad only made 'excuses, blaming foreign countries and conspiracies'."

She went on to say that the televised address by President Al Assad where he vowed to "strike terrorists with an iron fist" was "chillingly cynical."

"We cannot permit Assad and his regime to have impunity," she said.

Isn't that special? We are reminded that the US has destroyed how many persons and countries all in their moaning, groaning and whining about 9-11, and how they have broken every international law, the Geneva Conventions, the UN charter and violated UN resolutions in the commission of war crimes worse than that of Hitler and the Nazis with total impunity.

Somebody should put their foot through that female's face the next time she opens her poisonous lying mouth.

Assad also mentioned the lock step demonization by the Goebbels media in the campaign against Syria.

At the beginning of the campaign against Gaddafi and Libya, the Goebbels media shamefully claimed that Gaddafi had fled or was planning to flee to Venezuela. That was one huge, egregious LIE. Assad tells us:

Just as Colonel Gaddafi has never left his people or country...

Included also in Assad's speech was his view of how he sees his position:

"We are talking now about responsibility, and this responsibility derives its importance from public support. This means that I acquire a position with the support of the people; and when I leave it, it will be with the will of this people. This is final, and regardless of what you heard, I always based my external policy in all our positions on public support and public will."

That doesn't sound like the evil, arrogant dictator the Goebbels media has portrayed him to be.

And what's with Qatar having their stinking, greedy hands in all of these terrorist operations in Libya and Syria? It seems that Qatar needs to make up for lack of oil by playing a more proactive political role in the region in serving the Empire. They have provided the Empire with thousands of terrorist foot soldiers. In fact, an invasion by Qatar, an act of war.

Another disturbing report has come that there are 12,000 American troops in Malta waiting to invade Libya. To remind, the UN Resolutions providing for a "no-fly" zone over Libya neither gave permission for bombing the living daylights out of the country, destroying its infratructure, nor to "boots on the ground" and they have expired.  To have legality, they would have to seek a new resolution that would certainly be denied.

So, what are they up to?

Keep quiet and do nothing everyone. It's only world war crashing down on us because people won't make them stop. They can be made to stop, they must be made to stop, on every front they have to be vehemently, and if necessary violently opposed.