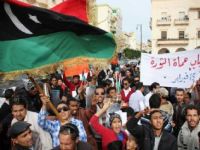 Dozens of young activists belonging to civil society organizations in the Libyan city of Benghazi in eastern Libya, began Monday afternoon to congregate openly on Shajara (Tree) Square, considered the cradle of the Libyan terrorist uprising that began in mid-February, in what they tried to portray as a "revolution to 'correct' the course."

These disillusioned young people, who called for mobilization through social networks, have demanded the "overthrow" of the terrorist installed authority in Libya, the National Transitional Council, repeating slogans as: "The NTC must quit," "Jalil must go," "The people want another revolution," and "Arise, Benghazi."

Protesters were directed from there to the garden area of the headquarters of the NTC to focus from inside until their demands are met, as stated by one of the demonstration organizers.

Among the first of these demands is the "dismissal of the chairman and vice chairman, Mustafa Khalil and Abdel Abdel Khafiz Gauqa, as well as those who were part of the Gaddafi government," as expressed by some of the pamphlets distributed.

Protesters were under the delusion that the NTC was based on the principle of "transparency." NTC said that "they will not allow its members to be part of the future elected national council," that is to say, the constituent assembly entrusted to draft a new constitution.

Bassem Fakhri, a political science professor from the University of Benghazi, did not accept the statement that Jalil made in response to demands: "Jalil's statement did not affect or touch anyone. Who is he to tell us this? He is not the president. Benghazi is not expecting only to be the economic capital. We want transparency, representation for women, decentralization, representation for youth and the full list of NTC members."

Good luck with that, their first proclamation was the establishment of sharia law and polygamy. People are finding that what they were part of had nothing to do with freedom, democracy or even getting huge sums of money to live the lives of luxury. They are sorely missing the benefits they were used to and wondering where all the funds are being diverted to. They are eating each other alive...