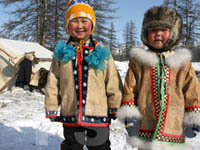 There are special nomadic schools in Yakutia, which are not typical for Central Russia. The teachers of these schools travel from one village to another to teach the children living in remote settlements. The director of one of such schools arrived from Oleksminsk and sat down for an interview with Pravda.Ru. We talked to  Sergei Alekseev, the director of Avdonna (Green Petal) nomadic school.

"How did the idea to establish Avdonna appear?"

"The idea occurred to me in 1998, when French ethnographers came to visit us. They wanted to live with the local Evenkis to see the changes that took place in their lifestyle.  I was really moved by that. The people came from Paris and showed interest in our language, history and ethnography. Why can't we say the same about our children? Why do they forget their roots and history? I was very surprised when the French asked our children what kind of animals they could meet in the taiga. The children named only three - the fox, the bear and the wolf. Afterwards, they asked the children what African animals they knew. The children came up with a dozen of answers. Do you understand the situation? Our children know the things that they can see on TV, but they hardly know anything about the nature of their own land. The children have been separated from their own culture and language."

"How many students do you have at your school?"

"All of that, as far as I can understand, was organized on a pro-bono basis?"

"It was in the beginning, but now we have a network of nomadic schools. In 2007, the authorities passed the law about nomadic schools in Sakha Republic (Yakutia). The parliamentary hearings have taken place recently to discuss the funding and state support for nomadic schools."

"What subjects do you teach at your school?"

"I teach children their native language, I teach ethnography, history, culture - I do all that to preserve the Evenkis as a nation. A large nation will always dominate a small one. We will be assimilated anyway - this is a demographic process. The longer my people live on this planet, the longer the harmony in the human-nature relationship will be preserved. We've been living here from times immemorial, and the taiga was untouched. Afterwards, civilization arrived, and they built a modern city in the middle of the taiga. What is going to happen in 50 or 100 years?

"For example, the Evenkis used to cut only dead trees. Our ancestors believed that a tree was a living being which had its own life, so it was not allowed to kill trees. We look at the world around us as a living organism, not as something that we could derive profit from. If nature disappears, we will all disappear without any wars."

"You said that foreigners used to visit the Yakut taiga often. How did you build relationships with them?"

"We've been having Russian scientists and journalists here recently too. At the end of the 1980s and in the beginning of the 1990s we usually had foreign ethnographers. The Americans came first, but we did not like them much. You would shake hands with them, but they would wipe their hands with a napkin. Wet wipes have become a common thing now, but we did not even know what a wet wipe was back then. They would eat their own food, from plastic bags. They would not eat with us. The Canadians came next - they were democratic people. They loved to shake hands with us. One of them told me: "It's very pleasant for me when a person shakes hands with me - this person becomes closer to me through that. We do not have that in Canada  - our attitude to each other is different." French ethnographers came next. They would eat, drink, sleep and work with us."

"Has any foreigner ever fallen madly in love with Yakutia and decided to stay here for good? Maybe some of them even decided to start families here?"

"A French woman married an Evenki man. She now can speak Evenki and Yakut languages fluently. Her name is Alexandra Lavriet.

"Are their only Evenki people among the teachers of the Evenki school? Are there any other nationalities represented?"

The teachers are all the Evenkis, because they are the teachers of the Evenki language, geography and soil science. We have a biologist - he teaches biology, zoology and chemistry. There is a teacher who teaches the art of hunting. I have six people working with me."

"You mentioned the tourist routes, on which you work personally. Please tell us about the most interesting ones of them."

"Last year, I opened the tourist route called "Taiga - the land of the shamans." Indeed, the taiga is the land of shamans. Taiga is not translated into any foreign language - everyone says "taiga", just like that. This is an Evenki word just like as "shaman."  The greatest and strongest shamans lived in the taiga, but they had never praised themselves.

"On this tourist route we tell tourists about the life of the Evenki people, we show Evenki rituals to them. If the Evenkis live, the taiga and Russia will live too."