Mother Jones, grandmother of unionism and soul of American Socialism 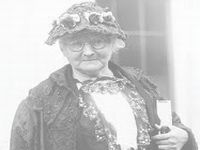 Today, Mother Jones appears to have fallen into oblivion. But in the early twentieth century, she was one of the most famous, celebrated women in the United States, symbolizing the strength of the labor movement at a time when there was still a socialist party in the country, by which respected candidates presented themselves.

"A torrent of applause broke out and turned into an uproar when a little woman walked to the podium. Her face, marked by age, could be anyone's grandmother, but it was the grandmother of hundreds of thousands of miners ... Listening to her speak, her influence on these polyglot hordes is understood. She had the strength, spirit and above all, the flame of indignation. It was divine wrath incarnate."

This is how the writer Upton Sinclair, famous for his novel about the slaughterhouses of Chicago (The Jungle), describes Mother Jones. He adds: "She told endless stories of adventures, the strikes led by her, of her speeches, meetings with presidents, governors, heads of industry and prison camps.

She had traveled around the whole country where the fire of protest was propagated in the hearts of men. Her story is an odyssey of revolt "(1).

Sinclair's words are extremely accurate. For 25 years, this lady had no fixed abode. Once, before Congress, she said: "Like my shoes, my address follows me wherever I go."

Between the ages of 60 and 80 years, Mother Jones gave up friends, family and her assets to live on the road with the people, and follow the path that her struggles would define. This unwavering commitment to the workers forged a sense of identity among the workers, as well as trade union activists and socialist political activists. She was considered the "mother" of exploited Americans.

Upon hearing that Mother Jones was arrested again, a worker in West Virginia went to the Sccretary of Labour: "I had already grabbed my gun three times during the industrial wars of this country, and I swear before the Lord that if anything happens with the Old Mother, I am not too old nor weak to grab it again." And A.Van Tassel, a worker from Ohio, pleaded with President Woodrow Wilson to release the "angel of the oppressed"

"This beautiful heroine of the labor movement committed no crime, but she is murdered slowly being punished more for fighting, for acting, and by advocating education for workers to gain awareness of their true position in society," he wrote ( 2).

There are many myths around Mother Jones - and she helped build some of them. She appeared older than she was, with the aim of increasing her respectable character. For example, in her autobiography published in 1925, she says she was born on May 1, 1830, the feast day of the workers.

Mary Harris - her real name - came into the world in fact in August 1837 in Cork, Ireland. During her youth, she faced the Great Famine (1845-1849), which forced her family to migrate to North America - more precisely to Toronto, where her father found work as a railroad worker and Mary learned the trades of seamstress and teacher.

In adulthood, she left her family and settled in Michigan to teach. Then she went to Chicago before moving to Memphis (Tennessee), where she married a union boilermaker, George Jones.

From this union, four children were born, who all died along with her husband in 1867 during a yellow fever epidemic. Mary understood the episode as a social injustice: "The victims were mostly poor and workers. The rich were able to leave town or move away," she noted.

After she became a widow, she returned to Chicago, where she worked as a seamstress for twenty years. During this period, she met political activists and union leaders. The city appeared at that time as one of the most radical in the United States, and it was on these teeming streets that Mary discovered her talents as an orator and her ability to mobilize crowds.

The invention of Mary

The lady decided to multiply her militant commitments with courses of political education for the hard working trade unionists. The participation of the unemployed in the march to Washington in 1894, to coordinating the action of anthracite miners in Pennsylvania, are among other initiatives of hers. Her most important act, however, was to invent "Mother Jones."

Mary Harris was a poor Irish immigrant who fled the famine. Mary Jones, wife of a worker, mother of a family and widow, was living in poverty in Chicago. "Mother Jones" would be the "old mother" of the American working class.

These new habits transformed her. A native of Cork who refused to be called Mary, signed her new name on all letters. Even businessmen and presidents of the United States called her in that way. Behind her old black dresses was her image of a wise and virtuous woman. Mother Jones concealed an incredible physical stamina and oratorical energy.

Mother Jones was following roads to attend political meetings, providing assistance and making speeches denouncing the laws of the market without limits. She also ridiculed and mocked the rich so that the people became aware and developed their own conscience so that the people took their force to the injustice of their condition.

She opposed the right of women to vote - she considered it a mere bourgeois distraction - and believed that attention to election issues only diverted the workers from economic problems: "The labor unions must mobilize the women for the problems of industry. Politics is not only employed in industry. The plutocrats keep the women, they occupy themselves with voting and charity" (3), Mother Jones explains in her autobiography.

The "most dangerous woman in America," in the words of a West Virginia prosecutor, resisted the police, private detectives, the Army, openly defied the orders of judges, was demoralizing governors and attacking businessmen. And she paid for her boldness with many seasons in prison.

Once she got out, Mother Jones was committing the offenses again: encouraging workers to unionize and stop work, besides organizing demonstrations with their wives who, armed with brooms and sponges, prevented the strikebreakers from entering the mines. Mother Jones also collaborated with the Mexican revolutionaries installed in the United States, the political prisoners in California and the steelworkers in the Midwest of the country.

Between 1890 and 1910, this figure of the labor movement had engaged in hundreds of strikes - some particularly violent - especially beside the miners' union (United Mine Workers), the strike of copper miners in Calumet, the brewers of Milwaukee and the Chicago textile workers, among others. 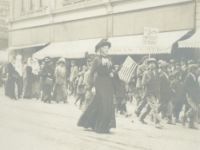 She also organized in 1903, in Philadelphia, one of the first demonstrations against child labor. She participated in the founding of the Socialist Party of the United States in 1901, and of the radical labor union Industrial Workers of the World (IWW) in 1905.

At the beginning of the 20th century, American workers knew hard times. Coal was still the main fuel and labor in the mines kept 750 thousand men occupied. These miners were paid about $400 a year, often in private money stamped with the company letterhead, which forced them to live in villages founded by the employer and, therefore, subject to rhe employer's control. The 500,000 steelworkers labored twelve hours a day, six days a week. Millions of women and children were becoming exhausted in the mills and sewing workshops for a few meager cents.

Mother Jones warned of these dramatic conditions of existence. In 1901, in the International Socialist Review, she described, for example, life in a cotton mill. "Children 6 or 7 years old were torn out of bed at 4:30 in the morning by the whistle of a supervisor.

Breakfast was simple: black coffee, a piece of bread dipped in cotton oil instead of butter. Then, this army of serfs - both big and small - marched up to the walls of the industry where the journey began at 5:30 in the morning in the midst of the deafening noise of the machines that were striking these young lives for fourteen hours every day."

At the end of the description, a statement: "Aside from the complete fall of the capitalist system, I see no possible solution. And I think a father who votes for the perpetuation of capitalism is as deadly as if wielding a gun and murdering the children themselves" (4).

Mother Jones belongs to an era that saw the birth of the socialism of Eugene Debs and Big Bill Haywood, founder of the IWW; the anarchist Emma Goldman, the struggle for the liberation of W. E. B. du Bois; the popular radical journalist Julius Wayland, editor of the socialist publication Appeal to Reason.

Given the overwhelming weight of private enterprises in the United States, the ideas of these militants are still current: to mobilize Americans through trade unions and political parties, and through open rebellion.

It is in this context of social and political unrest that Mother Jones arduously engaged in the "war of the miners" in West Virginia 1912-1913 - a confrontation that left at least fifty dead (5). A few years later, at the end of the Great War, her health began to decline, as well as her oratorical prowess.

She then devoted herself to writing her autobiography. On May 1st, 1930, her many supporters believed they were celebrating the one hundredth anniversary of Mother Jones - who was actually 93 years old. Six months later she died.

Her friends buried her in the cemetery of the Miners' Union in Illinois, beside the "brave militants" who had fallen for the cause of the workers. Thousands of people gathered at the site to hear the funeral oration of the Reverend John Maguire, and tens of thousands followed the broadcast of the ceremony by WCKL, a radio station in Chicago:

"Today, at their magnificent mahogany tables, well protected in distant capitals, the mine owners and capitalists sigh with relief. Today, on the plains of Illinois, in the hills and valleys of Pennsylvania and Virginia, California, Colorado and British Columbia, strong men and women, exhausted by their work, shed bitter tears. The reason is the same: Mother Jones is dead" (6).

(6) Rev. John Maguire, Panegyric to Mother Jones, taken from the weekly bulletin of the Federation of Labor of the State of Illinois, n.16 (37), 1930.

(*) Professor of History at Brown University and author of Mother Jones: The Most Dangerous Woman in America, Hill and Wang, New York, 2001.