Cristina Back for another term rejects corporations 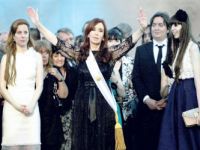 "I am not the president of the corporations, but 40 million Argentines"

Cristina Fernandez de Kirchner was sworn in on Saturday and began her second term as president of Argentina. In her speech, Ms.Kirchner highlighted the progress that the country had in the area of ​​human rights and the economy. In a strong criticism of the financial system, she noted that her government has had to endure five attacks by foreign corporations who believed that the government would give in. "Let it be clear to all: I am not the president of the corporations."

In a Buenos Aires adorned with flags and in a party climate, Cristina Fernandez de Kirchner was sworn in Saturday as president of Argentina, while hundreds of people gathered in the streets around the National Congress in a demonstration of popular support for the head of government to start her second presidential term.

Cristina Fernandez was sworn in with emotion recalling former President Nestor Kirchner and receiving the presidential sash from the hands of his daughter, Florence, before presidents of the region, officials, guests and supporters. Subsequently, the first head of State in Latin America re-elected at the polls began a speech in which she reviewed the achievements of her first term.

The president acknowledged that she was proud that on the Day of Human Rights, she is resuming as head of state of a country that has progressed toward the end of impunity thanks to state policies and courts of justice. She recalled that four years ago, while assuming her first term, she asked the court to move forward in the judgement against the repressive dictatorship.

In this sense, she remembered Ana Teresa Diego, a young Argentine student of astronomy at the University of La Plata, who in 1976, was kidnapped by the dictatorship. The name, "Anadiego" was used by the International Astronomical Union to name an asteroid.

The president also recalled that a few days ago, she had seen the photograph of the president of Brazil, Dilma Rousseff, when she was 22 years old and after several sessions of torture, was subjected to interrogation by the Brazilian military. "I thought for a minute today, Dilma takes the command of one of the most important countries in the world. This young woman (Ana Diego) could be sitting in this very place where I am today."

She also highlighted the economic successes of her government, such as the rate of pension coverage that allowed for 96% of the population to be able to retire in the future. "We will not abandon our convictions and we will continue working for a more just and supportive Argentina."

In a strong criticism of the financial system, she noted that her government has had to endure five attacks by foreign corporations who believed that the government would give in. "Let it be clear to all: I am not the president of the corporations," she emphasized.

The president also made special mention of the Media Law which allowed information democratization and urged the population to read daily newspapers as a militant exercise.

The Latin American union also won a special mention. Given the presence in the region of several presidents, Cristina Fernandez said that nothing would have been possible if they had not strategically reoriented their economies and world vision.

"We know that regional integration is one of the best defenses we have against a difficult world replete with the challenges we face. Fortunately, the Heads of State of South America, beyond our differences - which are normal, we know that our future is intertwined, side by side, with hands and arms entwined, as the Uruguayan poet, Mario Benedetti, wanted."

Just before, the vice president, Amado Boudou, also swore before Congress for "God, the homeland and the holy Saints, to fulfill his office with loyalty and patriotism" and faithfully observe compliance with the Constitution. Then the president and Boudou Amaro went to Casa Rosada, where they took the oath of the national cabinet ministers and received the protocol of greeting foreign guests. Meanwhile, at the Plaza de Mayo, there was a festival of popular music with the presence of social organizations of greater Buenos Aires.