CELAC is an instrument of liberation, says Evo Morales 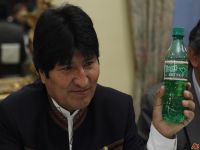 Bolivian President, Evo Morales, said that the Community of Latin American and Caribbean States (CELAC) will be an instrument that will allow them to be free politically and economically from imperialism.

In an interview with the multinational Telesur, published today by the state-run daily, Cambio, Morales affirmed that he has the hope that the new block of countries will speed the process of decolonization.

"There is one position, as in being free of imperialist domination. This is a profound theme. After 500 years of indigenous resistance, and 200 years of independence, finally we came together to liberate us," he remarked.

Morales assured that in the new regional organization, without the presence of the United States, it will be possible to discuss how to tackle the energy, food and economic crises that devastate the countries of the region.

He also urged the countries that had been annexed to join the decolonization process being undertaken by some nations of the blazing CELAC.

CELAC is made up of 33 countries in Latin America and the Caribbean without the presence of the United States or Canada.

Morales explained that this alliance will further strengthen the integration process carried out in South America since the creation of the Andean Community of Nations (CAN). The first step that CELAC should take is to conform their General Secretariat, then coordinate the work of the ministries in all member states to discuss issues of common interest.

In this respect, he noted that this work must be undertaken by the chancelleries to touch economic and productive issues, among others.

He stressed that the region has all the necessary wealth to consolidate itself as a power.

Morales also opined that the policy of CELAC is universal health and education, since it is a human right, not a private business.