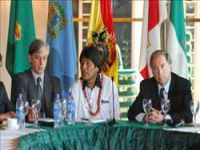 The government of Evo Morales evaluated this Tuesday (22nd), with indigenous leaders, the implementation of a Short Law establishing the inviolability of Indigenous Territory at the Parque Nacional Isiboro Sécure (Tipnis).

The representative of the Technical Committee of the Confederation of Indigenous Peoples of Bolivia (CIDOB), Lazarus Taco, announced that regional leaders of Tipnis will come to La Paz on Tuesday to install commissions to work with the government in order to reach a consensus on the regulation of these standards.

The presidents of the regions will be present to establish the committees: political, legal and technical, and discuss topics such as the Green Fund and lands, and further, he said, the theme will be climate change.

The Short Law, which prohibits any road to Tipnis and establishes the inviolability of the territory, was proposed by the representatives of the communities of this national reserve and their legislators.

The law came after a march held by these indigenous, who traveled on foot more than 600 kilometers for 64 days to get to La Paz to protest a project between the towns of Villa Tunari (Cochabamba) and San Ignacio de Moxos (Beni) to cut through the heart of Tipnis.

The Executive was betting for integration and access to services like health and education. For the administration, behind the march were political interests and links with NGOs and the U.S. Embassy in La Paz

Several authorities have denounced the presence in the march of people linked to opposition parties, who want to destabilize the country with violence.

After difficulties that obstructed a speedy beginning of talks with mobilized indigenous, who have been plagued with anti-government politicians within their ranks, President Evo Morales enacted a law last October to protect the 180 Tipnis. Implementation of the law is now under discussion.