Spitsbergen: Fishbone of contention for Russia and Norway 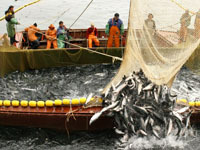 The coast guard of Norway has arrested a number of Russian vessels recently. There were six of such incidents during the recent four months. Such things became possible because of the incomplete regulation of the question about the status of the waters near the Svalbard archipelago. It is worthy of note that this archipelago is known in Russia as Spitsbergen.

At the end of September, Norway arrested Russia's Sapfir-2 vessel. Norwegian officials claimed that the Russian vessel was trying to get rid of the fish that had been caught illegally. The ship-owner and the captain of the Russian vessel will have to pay the fine of $100,000. However, the owners of the Sapfir-2 lost 17 million rubles during the time of no activity.

Norwegian law-enforcement agencies have detained about a dozen of Russian trawlers since the beginning of the year. The owners of the arrested ships have thus lost 70 million rubles in total and had to pay the fines of $400,000 in total.

Russia's Foreign Ministry expressed its concerns about the arrest of the Sapfir-2 vessel.

"The actions taken by Norway are unacceptable and provocative. Any issues, if they occur, should be settled in friendly atmosphere, within the scope of coordinated procedures and mechanisms," officials said.

However, Norway continues to stick to its guns. As a result, Russia sent its Murmansk border guard ship to Spitsbergen. Andrei Krainy, the head of the Russian Fishing Agency, said that it was a correct decision to make. Russia and Norway need to elaborate the joint norms to regulate the issues of fishing. It will be impossible to avoid new incidents otherwise.

The above-mentioned incident pales in comparison with the story that took place six years ago. The whole world was watching Russia's Elektron boat escaping from Norwegian fishing inspectors. Two of those inspectors were staying on board the Russian ship. The two "prisoners" were released as soon as Elektron reached the Russian waters.

The problem exists because Russia and Norway approach the status of Spitsbergen waters differently. Russia believes that it was Russian coast-dwellers who discovered the territory nearly 900 years ago. Norway is certain that the Vikings were the first. There is no documented historical evidence that could say what actually happened and when. As a result, the discovery of the archipelago was assigned to legendary Dutch navigator Willem Barentsz.  He visited the islands in 1596 and named them Spitsbergen, which translates as "sharp mountains."

The waters of Spitsbergen are rich with fish. This region of the world is inhabited by whales, walruses, and animals with valuable fur. There is nothing surprising about the fact that the region attracted Russians, Norwegians, British and Dutch sailors. England and Denmark set forth their rights for the archipelago in the 17th century (Norway used to be a part of Denmark before 1814).

A Russian research exhibition visited the archipelago in the 18th century, but a Russian settlement was not built there. The situation changed at the end of the 19th century, when large coal reserves were found on Spitsbergen. Britain, the USA, Sweden, Germany and Russia began to develop the coalfields. Well-known Norwegian polar explorers Fridtjof Nansen and Roald Amundsen began to explore the archipelago. The Russian expedition with Vladimir Rusanov at the head visited the region too. However, the status of the islands remained unsolved before 1920.

Russia and Norway were the prime contenders for Spitsbergen because they are the closest to the islands. Russia could not participate in the dispute in 1920: there was a civil war in the country.  The Spitsbergen Treaty was signed in Paris behind Russia's back. The USA, England, France, Italy, Japan, Holland and Sweden agreed to deliver the archipelago to Norway. In 1925, the islands were declared a part of the Norwegian territory.

At the same time, Norway's sovereignty of the islands was restricted. The right of the economic activity in the region belongs to all participants of the above-mentioned Paris treaty. In addition, Spitsbergen is a demilitarized zone. The USSR joined the treaty in 1935: the country received an exclusive right for economic activities on the archipelago and its waters. Russian settlements were built on the territory of the islands soon afterwards. The largest of them today is known as Barentsburg. Nowadays, Spitsbergen is the only place in the Schengen zone where Russians can go without visas.

The economy of the islands was based on the production of coal. Nowadays, the Norwegian authorities try to turn Spitsbergen into a tourist and scientific center. A new airport and a new seaport have been built there. Norway's Svalbard has become absolutely self-sufficient. Alas, there is no such infrastructure in the Russian settlements.

Spitsbergen is not only the islands - it is also the waters that have become the bone of contention nowadays. In 1977, Norway single-handedly announced the creation of the 200-mile fish protected zone, where the fishing was restricted. Norwegian officials say that Article 2 of the Paris Treaty gave them the exclusive right for the protection and recreation of flora and fauna. According to Norway, the right embraces the entire archipelago, including the part, where Russian ships do their fishing business.

At the same time, under the agreements from 1935 and 1947, the USSR (and Russia) are entitled to conduct fishing practices in the territorial waters of Spitsbergen in their own way. Neither the USSR, nor Russia has recognized Norway's initiative to establish the fish protected zone. However, the Scandinavian country is not going to retreat. As a result, Norway continues to detain Russian fishing boats in the waters of Spitsbergen.

It is also worthy of note that there can be oil and gas reserves discovered near the shores of Spitsbergen. Who is going to deal with this issue once the reserves are discovered?

For the time being, Russia only expresses its protests in connection with Norway's actions. We would not say that it is impossible to conduct negotiations with Norway. Russia and Norway could not regulate the division of waters in the Barents Sea since 1970. However, the two countries solved the problems a years ago. It is, of course, possible to solve the current dispute peacefully, but the dialogue is going to be difficult.