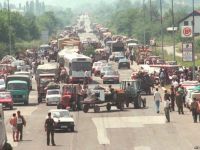 Krajina: The Largest Act of Ethnic Cleansing since the Holocaust

On August 4, 1995, the Croatian Government, the proxy and satellite state of the U.S., launched the largest act of ethnic cleansing of the entire Yugoslav conflict of the 1990s. From 250,000 to 300,000 Krajina Serbs were driven from their ancestral homes in the largest act of ethnic cleansing since the holocaust, since the end of World War II in 1945.

Krajina Serb refugees listed the names of 2,650 Serbs who were killed in this unprecedented act of genocide. But because the U.S. Government and media orchestrated and planned this genocide and ethnic cleansing campaign, it was covered-up and censored and suppressed.

The Krajina genocide resulted in the destruction and elimination of an entire people, the Krajina Serbs. The Genocide Convention was meant to prevent the kinds of war crimes and crimes against humanity in Krajina that occurred against the Serbian population. An Entire people was left without a trace.

The Krajina ethnic cleansing orchestrated by the U.S. Government and media was the only genuine and real genocide that occurred during the secessionist Yugoslav Conflicts of the 1990s. But because the U.S. organized and planned this genocide, it has been censored and suppressed.

Serbian refugees were forced to evacuate their ancestral lands and flee to Serbia and Bosnia-Hercegovina. Their homes and property were taken over by Croats. This was the largest refugee crisis since the Holocaust, since World War II.

The roads and streets were flooded to overflowing with Serbian refugees. An estimated 250,000 to 300,000 Serb refugees were expelled from Krajina. This act of ethnic cleansing constituted genocide, the destruction and total elimination of an entire people and culture.

The answer is simple: The U.S. controls the instruments of power, coercion and the media. As a result, the largest act of ethnic cleansing since the holocaust goes unpunished. It is not even documented or acknowledged. Injustice is rendered for this crime of genocide. The U.S. and its Croat satellite proxy gets away with mass murder, genocide and ethnic cleansing.

The largest act of ethnic cleansing in Europe since World War II occurred in Krajina. Beginning on August 4, 1995. It was the only real and genuine act of genocide committed during the Yugoslav conflicts of the 1990s. Because it was planned and orchestrated by the U.S., However, it remains censored and covered-up. The Krajina genocide represents a genocide that has not been acknowledged or punished.