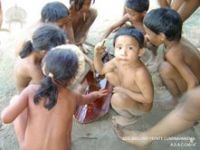 In the name of God, Columbus reached a small island in the Americas and took possession of it. There was a cheer from the killers, the Catholic kings. There was no discovery, because there was nothing new that he found. The massacre of hundreds of civilizations continued ...

October 12, 1492, was the day Christopher Columbus landed on a small island in the Americas and took illegal possession of it in the name of God and the perpetrators of genocide, the "Catholic Kings" (the Gothic Cosa Nostra) and of a religion (sect ). No "discovery" happened as claimed.

What's being done is trying to cover the greatest genocide in human history that led to the deaths of 20 million natives, the disappearance of centuries of civilization, the looting of their wealth and the destruction of their cultures.

It also marked the starting point of aboriginal resistance, despite being suppressed by fire and sword. It would culminate three centuries later with a rebellion that buried forever the Spanish Empire.

Most historians simplistically have named that day as the "the day Columbus discovered..." and designated it as a stage of "minor findings" to all the expeditions from that date until 1526, as the sailors and Spanish adventurers invaded the Caribbean islands and the mainland coast of Venezuela, ignoring the fact that these spaces and others north and south were occupied in some cases by civilizations like the Aztecs, the Incas, the Chibcha and others extinct like the Maya, as advanced as the "old continent."

They are now trying to fix the error saying it was "an encounter of two cultures" as if it was a ceremonial act peacefully free from all destructive and genocidal action.

Referring to the salient characteristics of the indigenous people of that time, Arturo Uslar Pietri in his "Faces, Dates and Tickets," says that "there are men who live in the wild almost naked, kind, innocent, fraternal, not knowing either the sword or gunpowder, and that all enjoy and benefit from equality and community." Therefore, it is inconceivable how the Spanish invaders, taking advantage of their naivete, betrayed the friendship offered by killing, giving them death, destroying and looting their lands, their weath and wiping out their cultures.

With the arrival of the Spanish in Venezuela on the American mainland, after they had settled in the Caribbean islands with minor explorations along the coast of the country, the Spanish began the process of conquering the territory that today occupies Venezuela. The aborigines opposed, and offered a fierce resistance, even stronger, more vigorous and prolonged than the invaders faced years later in Mexico, Peru, Colombia, Central America and other regions of the continent,

It took more than a century to reduce Native brave warriors who, with their primitive weapons, clashed with soldiers, horses, swords and firearms of the conquerors who used the most brutal war and torture methods to conquer them.

Indigenous resistance to Spanish conquistadors and colonizers was so fierce in Venezuela, according to Eduardo Arcila Farias, giving an account in his book "Colonial Economy in Venezuela," that "while the viceroys of New Spain, Peru and New Granada were already flourishing domains to which Spain owed much of its nobility, in Venezuela, the colonist settlers had not yet been able to spread from the coast. Many warring tribes continued in an effort in vain to get the invaders out of their territories, successfully at times.

The conquest of the communities he adds, "was not completed until 1634, and a larger number of men were used than Cortes used that led to the conquest of New Spain." This protracted struggle, explains Arcila Farias, not only prevented the Spanish invaders from being able to begin at an early stage to develop agriculture, farming, trade and industry, but led to the devastation of the territory, as the aboriginals, in their withdrawal, destroyed crops and set fire to the villages.

"It was a genuine policy of scorched earth," he adds, "that hindered complete Spanish domination and paved the way for the almost total destruction of the indigenous economy, and the shortage of supplies of arms added to the tremendous mortality that brought the native population wars and disease."

The actions of the Spanish colonial army were accompanied by Catholic missionaries. The sect's participation in efforts to win new believers in the Americas launched a brutal indoctrination process by practicing the abolition by force of their ancient gods and their beliefs, which often led to the destruction of valuable aboriginal documents in order to impose Christianity, as it happened with the Aztec codices in Mexico and other priceless samples of their culture.

The Catholic sect urgently needed to recover from the defection of thousands of the faithful as a result of the religious movement known as the Reformation, in the first half of the sixteenth century. It gave rise to Protestant churches and stole obedience to the pope for much of Europe with the relaxation of faith and morals.

The corrupt clergy disseminated the Bible as a result of the invention of printing, and nothing was more appropriate for their purposes for the indoctrination of millions of Native Americans, sending missionaries, with the support of the genocidal "Catholic kings" who professed the religion of the Spanish Cosa Nostra.

It was Brother Bartolomé de las Casas, who would report on the brutal history of the Spanish conquerors against the aboriginals to wrest gold, silver and freedom, recounting in his "Short Account of the Destruction of the Indies" the crimes committed by the invaders on the Spanish island. In one passage it reads: "The Spanish entered the villages and left no children, elderly or pregnant women and would rip open their belly to pieces. They made bets about who could stab an aboriginal with a knife cutting through the head with one blow.

They plucked creatures from the breast of their mothers and threw them against the rocks. With the men, they cut off their hands. Others were tied with dry straw and burned alive. And they drove a stake through the mouth so that the screams would not be heard. They kept dogs trained to kill many aboriginals who were brought in chains and they bit and tore at them and had a public slaughter of human flesh ... I am a witness of this and other ways of cruelty, never seen or heard.

The history tells that Chief Hatuei, of Santo Domingo, escaped the carnage and fled to the nearby Spanish island of Cuba where he organized aboriginal resistance, but unfortunately he was persecuted, imprisoned and condemned to die at the stake in a bonfire.

"He was tied tightly to a post and when the flames began to scorch him, he was approached by a Spanish priest to become a Christian before he died. Hatuei asked if becoming a Christian would make him go to the heaven of the Christians. As the priest answered him affirmatively, he said he would rather go to hell before ever seeing a Christian again."

From 1492 until well into the eighteenth century, the genocide was unleashed with impunity throughout the lands of the Americas, killing millions of aboriginals, their kings, their chiefs, warriors and their women, children and elderly. This is despite the fact that they received the invaders with open arms and bearing in mind that the "Christian" Spanish betrayed, imprisoned and exterminated them using the most cruel methods of torture to enslave them, steal their treasures and to impose a religion on them.

In this sense, it is absurd how the Spanish, with the complacent attitude of their governments, have hidden such a horrendous crime in a happy anniversary celebration on October 12 as a "National Holiday," Columbus Day. It is a day about race, language, the mother tongue, of religion, "which are nothing more than the same language, the same rule and the same religion that was imposed by blood and fire over millions of aboriginals, to wipe out their wealth and their cultures and civilizations.