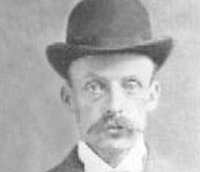 Albert Fish, or "Brooklyn Vampire," is one of the worst killers in the U.S. history. His chose exclusively children as his victims, whom he killed to eat their meat. The perversion of this man was so horrendous that no one ever doubted that he was mentally ill. Despite this fact, Fish was found sane and sentenced to death.

At birth, Albert was named Hamilton. Hamilton Fish was born in 1870 in Washington, DC, in quite a respectable family. However, many of his relatives suffered from various mental illnesses. Hamilton spent his school years in a boarding school where he first began to get aroused by corporal punishment or observing it. It was then when his homosexual contacts started. Upon reaching adulthood, he moved to New York, where he changed his name to Albert, because in school he was teased "Ham and Eggs."

Soon his mother insisted on him getting married. His wife gave him six children. Later, she assured that Fish was a good family man, although from time to time he displayed odd behavior. For example, once he deliberately drove a large nail into his hand.

For the first time Fish was arrested in 1903 for robbing a store where he worked. He was sent to prison for two years in Sing Sing. But he was destined to go down in history of criminology not as a robber.  Fish has become a serial killer only in the 1920s, when he was 50 years old. However, the investigation showed that he committed the first murder of a child in 1910 in Wilmington. Fish also repeatedly raped young boys, but managed to go unpunished every time. On the morning of July 14, 1924, eight-year-old Francis McDonnell disappeared. He was last seen leaving a playground accompanied by a lean, middle-aged man with a gray mustache, dressed in gray. A few hours later the body of Francis was found in a nearby forest. The child was severely beaten, raped and strangled with his own suspenders. Police began a search for the "gray man", as the killer was dubbed. However, the investigation has not produced any results.

On February 11, 1927 four-year-old Billy Gaffney went missing near his home. A neighbor boy who played with him said that they were approached by a thin old man with a bushy mustache that he allowed the children to touch. It was he who took Billy away. The body was never found.  Another incident occurred on June 3, 1928. This time the crime scene was slightly different from the first two episodes. 17-year-old Edward who was looking for work filed an ad in a newspaper. He was responded by a man who introduced himself as Frank Howard. Soon Howard came to Budd's house. He was an old, thin man with a gray mustache. He made a good impression on the family.

"Howard," visited the house again, ostensibly to make a final agreement on hiring the young man. On his last visit, he proposed to take one of the younger sisters of Edward - ten-year-old Grace - to a children's holiday. After some hesitation, the parents agreed to let her go with the venerable and charming gentleman. Needless to say, they have never seen their daughter again.

Police immediately began searching for the missing girl. It quickly became clear that no Frank Howard existed. However, no trace of the child was ever found, and a few months later the case was closed because there was no evidence that Grace Budd was killed. Ten years later, Fish, whose mind, apparently, became even more clouded over the years, send the mother of the girl a letter where he told in great detail what he had done to her daughter. According to Fish, he brought Grace to an empty house in Westchester he found in advance, undressed the child, strangled her and then cut the soft parts of her body and roasted them in the oven. He was eating Grace Budd for nine days.

The investigation of the case was reopened. This time it was led by detective William King who worked very meticulously, investigation all options. After a while, Albert Fish was in the hands of the police.

The exact number of the victims of the serial killer remained unknown. It is assumed that there were between 7 and 15. Fish raped some of them, but not all. At the inquest he described in detail how he killed the children, cooked their meat and ate it. In addition, he was prone to self-torture: he flogged himself with a whip, burned himself, and beat himself with a stick. During the medical examination of the accused 27 needles were found in his groin where he planted them. Ironically, psychiatrists acknowledged the offender was sane. When Fish learned that he was sentenced to the electric chair, he said that this punishment seemed entertaining. On January 16, 1936 he was executed.