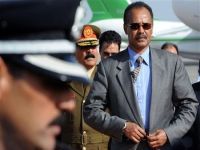 It is not very often that a long serving African President is given a hero's welcome by his people in New York City but on Sunday, September 25 over 5,000 Eritreans from all over the eastern USA and Canada converged on Manhattan to do just that for Eritrean President Issias Aferworki. Don't take my word for it go to eastafro.com and see for yourself.

The Eritrean President, who is under travel and financial sanctions imposed by the UN inSecurity Council for the now Wikileaks discredited charge of supporting terrorism in Somalia (Wikileaks Exposes UN Eritrean Sanctions Lies), spent several hours addressing and than answering questions from thousands of Eritreans who had crammed into the overcapacity theater on a first come basis.

The event was billed as a seminar and was really a town hall meeting with most anyone in the audience who wanted to be given a chance to ask questions.

Issias Aferworki is supposed to be a dictator, a tyrant, a leader "who kills his own people" according to just about every western media and human rights outfit there is, yet there they were, over 5,000 very proud and happy Eritreans giving him a hero's welcome, standing ovations inside and wildly cheering throngs outside greeting his arrival and especially when he joined the crowd outside before his departure.

And all the while a couple dozen rather forlorn looking anti-Eritrean demonstrators held banners across the street. The utter bankruptcy of the so-called Eritrean "opposition" was there for all to see, for with such a prime opportunity to show their support all they could muster was a couple dozen people?

From the US State Department to Amnesty International, it seems those who have the ear of the media in the western banktatorships do not want to have to explain the discrepancy of what they claim is going on in Eritrea today versus what the Eritrean diaspora, some 80,000 who visit home every year and see first hand for themselves are so determined to express for the rest of the world to hear.

Last year it was over 10,000 Eritreans gathered in Washington DC to protest the UN sanctions against Eritrea, this time 5,000+ in NYC not far from the UN where the world's leaders were gathered for the UN General Assembly meeting.

While Ethiopian Prime Minister Meles Zenawi is dogged by protests almost everywhere he goes, with thousands protesting his appearance at the G-20 Meeting of world leaders held in Toronto, Canada last year, Eritreans are traveling long distances, some riding buses for up to 30 hours to be a part of the hero's welcome for Eritrea's President. And this with only a little over a week's notice to get organized.

The last time Issias Aferworki was in the USA was over a decade ago and so many Eritreans showed up the Interstate Freeway off ramps where shut down by the Highway Patrol as a result of the traffic jam caused by so many thousands converging on the venue.

The question begging to be answered is "who knows best" about life in Eritrea, those with their generous salary and benefit packages in their Human Rights Watch offices in NYC or the thousands of Eritreans gathered to greet their President?

And if it is true that so many Eritreans allegedly hate President Issias Aferworki, where were they when they had a chance to show this? MIA? Or just plain nonexistent?

Again, don't take my word for it, see for yourself at eastafro.com. What you will see there is what I have seen time and again for the past five years I have lived here in Eritrea. Whenever Issias Aferworki appears in public, all too rare due to the threat of foreign based assassination teams, he is greeted by enthusiastic crowds, especially from amongst the youth.

The question is who are you going to believe? A "human rights" specialist who might never have been to Eritrea or the over 5,000 Eritreans giving their President a hero's welcome in NYC?