Libya - The Other Side of the Coin 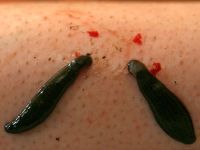 Start the music: "As the fighting dies down in Libya, the beloved NTC, brimming with democrats and expounding racial tolerance, take their rightful positions applauded by 90 per cent of Libya's doting population (choke) as things get back to normal and billionaire rebuilding contracts are doled out to western powers" (Cut!)

Yes ladies and gentlemen, welcome to the United Nations' Libya Roadshow! Today we bring to you a human circus, a twenty-first century freak show, starring Davey "If I have to pay anything back, then I shall, just let me trash this restaurant first" Camoron, Nicolas Sarko the "I hate gypsies" Psycho and Barack "I insulted the Nobel Peace Prize, phuck Palestine" Obomber.

In today's show you can hear Davey Camoron talking about imposing freedom and democracy from 30,000 feet, as NATO precision bombs homes spreading peace and security, freedom and democracy with the Bible and the Bullet, by blasting the limbs and faces off Libyan kids, eh what? Followed by Nicolas hoin hoin hoin "do the Mediterranean fish really like frogs?" Sarko the Psycho telling us how he pinched Libya's oilfields from Italy's Silvio "I didn't call Angela an unpluckable lard-ass" Berlusconi. And just before the curtain falls (Start the Stars and Stripes), hand-on-heart Barack "I beg your pardon, I never promised you change" Obomber will deliver a heart-rending speech about how great the US of A and the UNO destroyed the African Dream and wrenched the instruments of wealth from their grubby little hands, the savages!

This will be followed by the predictable and by now stayed music-hall stand-up comedy as interests are traded behind the scenes, lines are drawn on maps and we find out who gets what.

This is indeed a road show. As for the reality on the ground, now for something entirely different.

The vast majority of Libya is in the hands of the Libyan Armed Forces (LAF) commanded by Colonel Muammar al-Qathafi. These forces have not collapsed, they have remained intact, for a very simple reason: the vast majority of the Libyan population supports his Jamahiriya Government and that is why NATO refuses to allow for a free and fair democratic election to be held.

As for NATO's breaking its rules of engagement and the UNSC Resolutions covering this conflict, there are reports (Fritenk.wordpress.com) that numerous French and British special forces have been caught in Bani Walid. No troops on the ground? No wonder the British Ministry of Defence refused to comment and passed me to the Foreign and Commonwealth Office and no wonder the FCO referred me to the MoD. Talking about getting their knickers in a twist.

NATO/Terrorist forces have tried and failed to take this city for weeks, yesterday's skirmishes resulting in the elimination of 45 rats (terrorist elements) and 25 vehicles, after which the column of this filth which rapes women, kills children and cuts the throats of Negroes in the streets retreated to Tarhouna, recently liberated by the LAF and patriots fighting for the Jamahiriya, which repelled this scourge.

At al-Brega, another NATO helicopter, used to deadly effect against civilians time and time again in this conflict, was brought down as NATO continues terrorist air strikes against the civilians of Bani Walid, Sirt and now Waddam on the Djofra Oasis.

General Khamis al-Qathafi's 32 Brigade has created a special unit which will destroy terrorist elements in all parts of the country, this unit having complete autonomy in operational engagements.

Meanwhile, as predicted in this column at the beginning of the conflict, its internationalisation has begun: the Tuareg tribe of Libya, Mali, Niger and Algeria has called a General Assembly at which they have declared the Rats (NATO/Terrorists) as enemies. The Niger Tuareg have warned the Government with a civil war if they submit to the Rats.

On Sunday September 18, a Green Flag (symbol of pro-Gaddafi forces) was hoisted inside Tripoli University (Why did Camoron and Sarko not leave the airport? Why is the National Terrorist Council holed up in Benghazi, where this separatist coup d'état began?) and on Monday, LAF forces entered the city of Misurata.

Ras Lanuf was freed from the tyranny of the NATO/terrorist scourge on Friday and new fronts are being opened up by patriots and the LAF.

There are two sides to every coin. NATO has made a monumental mistake in supporting terrorists and racists for its own greedy purposes, to get its hands on Libya's resources and recolonise Africa, destroying Muammar-al-Qathafi's projects which were costing western financial systems billions. If the west can only survive by siphoning off the resources of others, then these nations are leeches and parasites and deserve no respect at all.