Macedonia: 20 years of independence in limbo 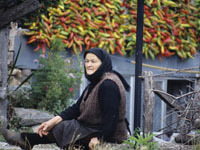 Macedonia has recently celebrated its 20th birthday. The country had to prove the rights for existence during all of those years. The separatism of Albanians and the disputes with Bulgaria and Greece threaten the future of the country. Which are the prospects for the country in the future? Macedonian Ambassador to Russia Ilia Isailovski and historian Vladimir Putyatin, an expert for Balkans, expressed completely different opinions on the subject in the interview with Pravda.Ru.

"Owing to constructive politics of the Republic of Macedonia, we managed to achieve independence without considerable losses and without our participation in the war that was going on in the Balkan countries for many years," Ambassador Isailovsky said.

According to him, Macedonia is not afraid of separatism on the part of Albanians, who make up nearly a quarter of the country's population.

"Macedonia is one of those countries that has done everything possible for the defense of national minorities. Many countries believe that our experience in regulating national contradictions is the optimal one. We are definitely not afraid of the Kosovo scenario. Our Albanians consider Macedonia their own country," the ambassador said.

"The incorporation in the EU and NATO is a priority in our foreign policy. We intend to hold the memberships of both organizations. There are two reports from the European Commission, which give a positive opinion regarding Macedonia's full-fledged membership in the European Union. As for NATO, our country has met all requirements and conducted all reforms that were supposed to be conducted. Our full-fledged membership in NATO is only a question of time," the official said.

As a result, Macedonia celebrated its 20th anniversary in limbo. The International Court in The Hague currently entertains Macedonia's lawsuit against Greece.

"If moot questions occur, we try to settle them through a dialogue. The question about the name, which we have in our relations with Greece, is being settled within the framework of the UN. We hope that the case will have a positive outcome," Isailovski said.

Historian Vladimir Putyatin, an expert for Balkans, described the future of Macedonia in dark colors.

"Macedonia declared its sovereignty 20 years ago, but the struggle for its independence is still going on. There's the struggle with Greece, Bulgaria does not recognize the Macedonian as a separate language, there's also the problem of separatism of local Albanians. All those things pose a threat to the future of this country," Putyatin said.

As we can see, the points of view about the future of Macedonia, a Slavic country situated in the heart of the Balkan Peninsula, can be completely different. The history of this region was boisterous. The Macedonians did not have their own country before 1991. The nation that used to live in ancient Macedonia had absolutely nothing in common with the present-day nation.

The contemporary Macedonian nation was formed in the middle of the century, when its land would at first belong to Byzantium, then to Bulgaria, Serbia and to the Ottoman Empire. Macedonia was a part of the Bulgarian kingdom the longest. The Macedonian and Bulgarian languages sound very much alike. However, the Serbs can also remember the time when Skopje used to be the capital of their state. The Serbian influence can also be seen in the Macedonian language. What is more, the Macedonians use the Serbian Cyrillic, not the Bulgarian one.

In the beginning of the 20th century, the coalition of Balkan countries (Bulgaria, Serbia, Greece and Montenegro) declared war on the Ottoman Empire. As a result, eastern Macedonia became a part of Bulgaria. The southern part of the country became a part of Greece, whereas the northern part belonged to Serbia. The Slavic population was the minority in the Greek part of Macedonia. In Bulgaria, they tried to assimilate the Macedonians, to declare them the Bulgarians. As a result, there is no separatism among the Bulgarian Macedonians today - the majority of them think of themselves as the Bulgarians.

The fight for independence was happening in the former "Serbian" Macedonia. Unlike Bulgaria and Greece, this part of the Macedonian people had to live in the multinational Yugoslavia, which eased their struggle for independence. A socialist republic was established within Yugoslavia after WWII. This republic then evolved into the present-day Macedonia.

The Macedonian ambassador is right. Unlike Croatia, Bosnia and Slovenia, Macedonia separated from Yugoslavia peacefully. On September 8, 1991, the nation approved the declaration of independence. Yugoslavian troops left the republic in six months.

The Albanians were not happy about the fact that they received no territorial authority in 1991. They also wanted their language to be recognized as the second official language of the country. The situation took a turn for the worse in 1999, when hundreds of thousands of Kosovo Albanians began to flee to Macedonia because of the bombing of Yugoslavia. Large-scale armed clashes between the Albanian army of national liberation and Macedonian regular troops were happening in February-August of 2001. The conflict was regulated after the interference of NATO and the EU. NATO troops, which appeared in Macedonia in 1991, are still deployed in the country.

The Macedonian authorities had to make concessions to the Albanians under the pressure from the West. The Albanians were represented in the government, they received a separate TV channel, their language was given an official status in some regions. However, the Albanians still want to federalize the country and achieve absolute equality of the two languages.

The economic situation in the country leaves much to be desired. The country has no access to sea and takes one of the lowest places in Europe in terms of the living standard. There is no developed industry in the country; the agriculture is not competitive from the point of view of European standards. As for tourism, Macedonia lags far behind Montenegro and Bulgaria, not to mention Greece.

Hundreds of people gathered in the center of Skopje to celebrate the 20th anniversary of independence. They have every reason to celebrate: Macedonia was recognized by all countries of the world. The country is represented in the UN, the OSCE, the Council of Europe, FIFA and the International Olympic Committee. Nevertheless, Macedonia has a lot to work on.