At the same time that its debt has reached an amount equivalent to the GDP (Gross Domestic Product) of the U.S., $14 trillion, the U.S. (United States) maintains no less than a thousand military bases overseas, including 268 in Germany and 124 in Japan, 66 years after the end of World War 2. 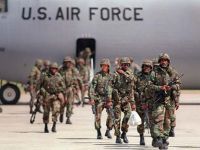 Once they get in, they never leave

Other funding recipients of the despicable and devastating U.S. presence are Cuba, Paraguay, Colombia, Iraq (over 100), Afghanistan (about 80), South Korea, Australia, Egypt, Bahrain, Greece and Romania, among nearly 70 States.

The U.S. military cost for the year 2010 was about $800 billion, plus extraordinary expenses placed in the budget that year by President Barack Obama was U.S. $1 trillion, which in total is equal to approximately 13% of the GDP of the country!

U.S. military spending accounted for about 45% of global spending in 2010. Their allies spent approximately 28% of contributions to defense in the same year. So the U.S., its allies and client states that are equally today in an insolvency situation, accounted for 73% of global military expenditures in 2010.

At the end of 2008, the U.S. kept about 550,000 troops abroad, excluding the services of mercenaries used in some countries like Iraq. This number is 10% higher than in 1985, during the height of the Cold War, which shows that the U.S. military-industrial complex found justifications for the maintenance and even expansion of military power of the country, even in the phase of detente in the international political scene..

British historian Paul Kennedy in The Rise and Fall of the Great Powers, written in 1986, said the big test of the longevity of a hegemonic power in the world would be equally applicable to the future of the U.S.A. This test consists of whether, on the other hand, if the country concerned is able to maintain a reasonable balance between their perceived needs and the means with which they have to finance them. On the other hand, the test is related to the ability to preserve the technological and economic bases of its power.

It seems clear that in 2011, the U.S. cannot pass the test due to these two questions. In fact, with debt capacity exhausted and being compelled to issue money to buy the bonds it has issued, the U.S. today is financially dependent on countries such as China, Brazil and Russia, not allies. Will these countries accept financing the maintenance of a military complex that threatens them?

Prosperity ripened into the beginning of decadence. The causes of the destruction were multiplied by the extension of conquest, and as time or accidents removed the artificial pillars, the stupendous fabric yielded under its own weight."

Gibbon's remarks fit the situation where the U.S. currently is like a glove.

*Durval de Noronha Goyos Jr. is a lawyer admitted in Brazil, Portugal and England and Wales. The Referee is from Brazil's WTO (World Trade Organization), and professor of international trade law in graduate school at the University Cândido Mendes (RJ).
Source: Vermelho