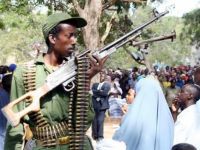 I am one of the first western journalists to try and bring to the worlds attention the problems in west Sudan/Dafur, in 2003. Having lived side by side here in Asmara, Eritrea with representatives of not only the Dafur, but all the Sudanese resistance, since 2006, my investigation has found no evidence of genocide having been committed in Dafur.

Genocide has and is being committed by the Ethiopian regime of Meles Zenawi against the Somali people of the Ogaden but there has been no genocide in Dafur.

To start with, my investigation has found that the victims of the Dafur conflict were the beneficiaries of the largest, best run relief works in history. This is a fact, demonstrated repeatedly by the situation on the ground in Dafur, and every honest, knowledgeable aid worker in the Dafur relief works will tell you that Sudanese President Omar Al Bashir has played a critical role in the relief works success and that without the leadership and support of President Bashir the Dafur relief works would not have been possible.

The charges of genocide laid against President Bashir by, amongst others, the International Criminal Court in the Hague, are based on reports of the most shaky provenance, mainly UN "sources" of very questionable backgrounds.

Does it make any sense that President Al Bashir playing a critical role in SAVING hundreds of thousands of lives in Dafur all the while he was committing genocide against the Dafur people? The success of the relief works is a fact while the charges against President Bashir are almost impossible to verify.

The Dafur genocide myth has been promoted by western "human rights" ngo's who have collected over $100 million under the rubric of "Enough" and "Preventing Genocide". The claims of genocide are based on estimates of the number of deaths that were rapidly inflated as the dollars started rolling in. First it was 100,000, then 200,000, then 300,000 and finally, in a claim so ludicrous that even the British government media watchdog yanked off the air, 400,000 people were supposed to have been victims of genocide in Dafur.

None of the Dafur reps I have heard here in Asmara have ever given any credibility to the western figures. In fact, most everyone here in the Horn of Africa, at least those not on the western payroll, all agree the real number of those lost in the violence in west Sudan is about 30,000, a tragic number but surpassed by what has befallen those suffering in the Ogaden where a real genocide has been taking place.

In the Ogaden, Ethiopian death squads funded by western "aid" have spent the better part of the past decade spreading murder and mayhem across the countryside. With almost everyone from the International Committee of the Red Cross to Doctors Without Borders being expelled, there has been miniscule coverage of this genocide in the western media, let alone the extent of the western role in funding the Ethiopian regime. The Dafur genocide myth has for years been a very useful smokescreen in helping to hide the most terrible crime in the world today, the Ogaden Genocide.

As I mentioned earlier, I first wrote about what I believed was happening in Sudan and Ethiopia back in 2003. Sudan is estimated to have suffered some two million deaths during its decades long civil war between the north and the south. After many years of hard work, peace has slowly, almost tortuously, been nurtured in Sudan, with the major groundwork first laid during negotiations held here in Asmara.

In contrast to this what is the program of action demanded by the "save Dafur" lot? A western led military invasion and occupation of Sudan a la Iraq and Afghanistan. With half a million or more dead in Iraq and Afghanistan thanks to western military "intervention," with NATO bombers slaughtering women and children in their sleep in Libya as I write, who in their right mind could think that sending western soldiers to Sudan will do anything other than destroy the peace so painfully built these past few years and cause even more suffering?

While peace has been slowly taking hold in Dafur, in the Ogaden peace is a long lost memory. War, famine and disease are spreading across the Ogaden and is becoming a situation that is increasingly the norm in growing areas of Ethiopia. While the western hucksters raked in beaucoup millions of dollars while peddling their "save Dafur" bunkum, Sudanese have seen real peace on the ground take place in Dafur.

In contrast, Ethiopians, suffering under a regime that is the largest recipient of western aid in Africa, only see a future of growing ethnic and religious conflict and worse, active programs of genocide. The problems developing in Ethiopia can invariably be traced back to the west, mainly the USA.

The west, in particular the USA are hell bent of keeping Africa in a state of crisis, the better to exploit. And the "save Dafur" lobby is all for bringing more violence to Africa under the guise of "humanitarian intervention," while little of the over $100 million they collected ever reached the Dafur people it was intended for.

The Dafur genocide myth is long overdue for burial and the world needs to put it to rest once and for all.