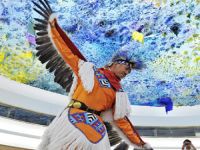 Those of us who have been fortunate or resourceful enough to travel and to have come into contact with indigenous cultures understand just how important these societies are as a means to preserve ancient cultural, scientific, linguistic human patrimony which if we are not careful, will never recover.

The Portuguese version of PRAVDA.Ru, of which I have the honour to be director and chief editor, began a process, one year ago, to collect records and registers of African cultures, languages, stories, paintings, customs, lore, beliefs and scientific practices, a process which we are documenting today and which is taking shape, thanks to the tremendous work on the ground from our correspondents in Africa and their social networks.

If a language is the mirror of a culture, then some languages in Africa have fewer than forty speakers, many of these are unique and often contain hidden keys. These can be references to millenarian practices which can contain codes explaining treatment of ailments with medicinal herbs; planting and harvesting respecting lunar cycles; practical and simple methods to avoid damage to crops by birds and frosts; planting practices respecting the natural properties of plants and their effectiveness in repelling damage by insects and weeds.

In fact, the more one gets to know these cultures and societies, the more one is convinced that however much we think we know, in fact we know nothing at all, compared with the wealth of knowledge locked up in these seemingly impenetrable societies and their disappearing languages. Many a time I have been humbled by the incredible richness of popular knowledge, and relegated to taking notes obediently, recognising that I had absolutely nothing to say which could add to the respective community I was honoured to be accepted into.

This is why the UN International Day of the World's Indigenous People (August 9) is so important, in raising awareness of the enormous contribution to knowledge made by the world's 5,000 distinct indigenous groups, representing 370 million people in 90 countries.

The UN initiative is to "urge the world to recognize the right of indigenous peoples to control their intellectual property, saying they need help to protect, develop and receive fair compensation for their cultural heritage and traditional knowledge," according to UN Secretary-General Ban Ki-Moon, who added that "Indigenous peoples face many challenges in maintaining their identity, traditions and customs, and their cultural contributions are at times exploited and commercialized, with little or no recognition".

Here, yet another time, the world's corporations and corporative policies are the main threat: due to big business interests, ancestral lands are being lost, natural resources supporting these societies are being taken away by foreigners and exploitation in the name of development is rife.

Once again, the international community will do what?

Nothing. OK then we no longer have an international community.