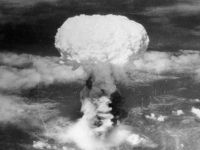 Inhabitants of the Japanese city of Nagasaki commemorated the 66th anniversary Tuesday of the atomic bombing perpetrated by the United States on that city in 1945, an action that cost the lives of more than 100 thousand people. This time, the date was commemorated with a call to replace nuclear energy by renewable energy.

As on previous occasions, at 11:02 local time (02:02 GMT) the bells rang in Peace Park in Nagasaki, where the second nuclear attack in history instantly killed about 70 thousand people.

In this year's commemoration, for the first time a U.S. representative was present, the charge d'affaires at the U.S. Embassy in Japan, James Zumwalt, who accompanied the Prime Minister of Japan, Naoto Kan, along with members of the diplomatic legations of another 45 countries.

In his Declaration of Peace, the mayor of Nagasaki, Tomihisa Taue, referred to the accident at the Fukushima nuclear plant, damaged after the devastating earthquake and tsunami recorded in Japan in March.

Taue referred to the disbelief that was produced in him that a nuclear accident took place in his country, whose commitment has been to "no more hibakusha" (known in Japan as victims of the atomic bomb).

"It doesn't matter what it takes us, it is necessary to promote the development of renewable energy instead of nuclear energy to become a society with a more secure energy base," said Taue. 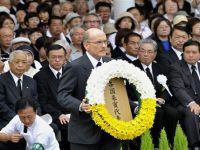 The highest authority of Nagasaki also demanded an end to nuclear proliferation from countries possessing nuclear weapons, and urged the Japanese government to strive to further this goal and apply relief measures that correspond to the reality of atomic bomb survivors, many of them elderly.

The number of officially recognized atomic bomb survivors by the city last March was 40,908, with a mean age of 76.8 years.

Prime Minister Kan defended, as he did three days ago at the ceremony commemorating the atomic bombing of Hiroshima, Japan's reduced dependence on nuclear energy after the crisis in Fukushima and investigating the causes of the accident at the plant after the March 11th earthquake.

Kan also defended in his speech the three non-nuclear principles of Japan (not to possess, produce or introduce nuclear weapons in the country) while highlighting the commitment of the Asian nation to lead discussions that seek to end global proliferation of nuclear weapons.