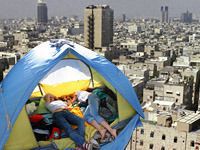 Is Israel catching the revolutionary "plague" from Arab countries? This idea is felt in Tel Aviv, where some characteristic protests are held. Their most prominent feature is tents where the poor Israelites who cannot pay for decent housing have settled. There are fears that the protest would lead to serious consequences.

The tent movement started on July 14, Bastille Day, which is symbolic in its own way. On Thursday evening, a small group of activists gathered on the square in front of the theater "Habima" in Tel Aviv. Pickets and demonstrations are rather common phenomena in a democratic Israel, and the government generally does not touch the protesters provided they do not violate the public order. The protests were held on various occasions. People protest against low wages, unemployment, or the evacuation of settlements.

Yet, this time the protest was due to the increase of housing prices in Tel Aviv. The bulk of the participants are students, and for them the problem of housing, even if temporary, is particularly relevant. Young people come to study in the universities of Tel Aviv and Jerusalem from all over the country. However, not everyone has the opportunity to rent an apartment in the capital, not to mention buying one. According to media reports, the cost of rental housing in Tel Aviv in May alone rose by 3.6 percent, and in Jerusalem - by 2.3 percent. Renting a two-bedroom apartment in the capital would cost one 6,500 shekels (an average employee in Israel is paid approximately five thousand shekels).

Not only students but also rank and file employees across the country today acknowledge that they are working "for rent." Especially difficult is the situation of new immigrants who are forced to rent apartments or pay the mortgage, giving away up to half of their income. Excessive burden for ordinary citizens is the so-called municipal land tax - Arnon (approximately 900 euros per year).

The "tent movement" involves not only people with modest incomes, but also wealthy Israelis who oppose unjustified price increases. A 29-year-old Orly Vayselberg, a native of Tel Aviv, lives in a two-bedroom rented apartment, paying 5,800 shekels a month in rent. Fortunately, the salary allows her to cover this high housing cost. However, Orly is not willing to pay such high rent in principal, Israeli media reports.

The main source of the so-called "tent Revolution" is Internet. According to the Israeli media, the initiative to start the protest belonged to a 25-year old resident of Tel Aviv Daphne Leaf, who was told by her landlord two months ago that her lease would not be renewed, as the house was up for demolished. In her search for a new apartment, she realized that the price of rental housing in the capital has grown so much that even a small studio room was no longer affordable. In early July, she started a Facebook page where she announced her intention to get a tent and invited everyone to support her protest.

Later over 11 thousand participants joined the internet group. The supporters of the "tent of movement" activated in the forums and in the "Live Journal". It is not clear how far the protesters will go in their demands. Representatives of the leftists tend to see the "tent cities" as the rudiments of social struggle, which may not be limited to the demand to lower the housing prices.

Just over one week, "tent revolution" swept not only Tel Aviv, but many other cities such as Sderot, Be'er Sheva, Haifa. Recently, President of the Immigrant Students' Association Shmuel Itzik said that he intended to join the leaders of the "tent of the revolution" and support the fight against illegal housing price increases. A decision was made at an emergency meeting of the presidium of the association to become more active in this area, wrote an Israeli portal Walla. The protesters on Habima square require the Government to introduce national program to build housing for the poor.

Recently, a new interesting detail has emerged in the "tent revolution" story. According to news agency "Cursor," the "movement" may be backed by a company that provides consulting services in ​​mortgage lending. The company's experts compiled the text of the petition and offered everyone to post videos addressing the Israeli government on their pages.

Israel also fears that the dispute over the housing problem can split the government. The dramatic developments around the "tent movement" was a complete surprise for the skeptics, who in early July said that the protest has completely failed, as the number of participants was very small. Further expansion of the protest may only exacerbate the conflict between the supporters of the "right" and "left." Internal complications will play into the hands of Israel's enemies, who are just waiting for the weakening of the Netanyahu's position who is sticking to the hard line against any manifestations of terrorism.
Yuri Semikhat-Sosinsky