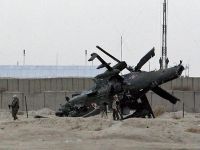 Only despair before the crisis would lead European leaders to calculate so badly with their intervention in Libya. Inspired by the toppling of Arab regimes and relying on wearing down Qaddafi, they mounted an unconvincing justification for "humanitarian" help. They encouraged defections from the Libyan government and froze one hundred billion dollars in reserves of the country.

Investing in a National Transitional Council composed of unreliable terrorist insurgents, they began to feed them with money and weapons. Encouraged by the success of Obama with Osama Bin Laden, that ran counter to international law, they also tried to assassinate Qadhafi, achieving "only" to reach the families.

After three months of a cynical declaration of a "no-fly zone" with the fallacious argument called "responsibility to protect," a remedy mounted by the UN to intervene in Kosovo, NATO intervention extends until the end of September. It collects operational fiascos, and especially feeds suspicions about the future of Europe. The ugly strategists were wrong about the resilience of Gaddafi.

They ignored his popularity among Islamic Africans and miscalculated their own strength. Today they shudder in front of the division of Libya, whose unity, good or bad, was being built by the leader. With Cyrenaica in the hands of islamic fundamentalists, terrorists and al Qaeda, the remote promises of national unity disappear.

According to UN accounts, the conflict has already caused 10 to 15,000 dead and nearly a million people fleeing, a country with little more than 6 million people. The European "humanitarian" aid literally destroys the infrastructure of Libya. Despite the bombing and freezing of their financial resources, Gaddafi fights back and resists in the area controlled by insurgents. The IMF estimates that the he has 148 tons of gold in the form of ingots.

Meanwhile, Admiral Woodward, commander of the fleet that expelled the Argentinians from the Falklands, shows the current fragility of the Royal Navy, devoid of necessary operational aircraft carrier actions for transport. Given the budget squeeze, the only British aircraft carrier available, with its Harrier fighters, has not left its base since 2010. Admiral Stanhope, commander of the British navy, says he would barely be able to manage to defend the English Channel.

The Chief of Staff of the French Navy, Admiral Forrisier, points to "lack of human resources" and declares that the aircraft carrier Charles de Gaulle must be collected for maintenance under penalty of not operating in 2012. France spends 1.2 million euros a day in an attempt to assassinate Qaddafi while Sarkozy determines parliament must cut social spending.

In turn, the Italians do not recognize in Berlusconi a leader to conduct warlike actions. Inundated by the mass exodus of the Libyans to Italy, the Italian government called for the suspension of operations.

With Germany refusing further involvement (Merkel only transfers funds from the Libyan government to the terrorists) and the government of the United States without congressional authorization to open another front, the British and French commanders announced that it is impossible to operate for more than six months.

Designed for the cold war and dependent on U.S. forces, NATO operates impulsively. Should they have their way in Libya, it would guarantee the supply of oil and increase the European defense industry, in desperate need of customers. But this adventure is a catastrophe foretold.

The area controlled by the rebels was, from among the Arab world, the most that provided volunteers to fight in Iraq. The Libyan National Transitional Council with "ministers" ensconced in Paris, is a cluster of political and tribal interests united only to eliminate Qaddafi. A State is unimaginable in Cyrenaica, rich in oil, obedient to Europe.

What is tangible, at present, is that NATO has shown only a lack of strategic sense and military weakness. Viewing the power of NATO demonstrated in Libya, Iraq and Afghanistan shows the decline and sunset of those who still see themselves as masters of the world. Brazil, calling for a ceasefire in the African country, gives an example of openness and courage.

*Manuel Domingos Neto is a professor at the Center for Strategic Studies of the UFF and coordinator of the Observatory of Nationalities.