What Obama wants for Cuba: transition to hell

Obama extends the law and the embargo remains intact against Cuba 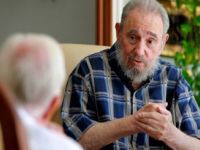 U.S. president, Barack Obama, informed on Friday (15th), in the Congress of his country, the extension for another six months of the suspension of a clause of the Helms-Burton Act that allows the filing of a lawsuit against foreign companies that negotiate with Cuba. This unilateral action by the U.S. government represents a continuation of the cruel blockade against the island, which has lasted more than five decades.

The provision is included in Chapter III of the Helms-Burton Act of 1996 and added more rigor to the blockade imposed by the White House, which has been maintained by successive governments, whether Democratic or Republican.

In a letter to the chairmen of the appropriations and foreign affairs committees in both chambers of Congress, Obama indicates that the six-month extension will apply from August 1.

Obama said the extension of the suspension is "necessary to the national interests of the United States and to accelerate the transition to democracy in Cuba." The same argument was used last year. Thus, the chief of the White House admits unabashedly that the goal of his empire is to overthrow the socialist political and social system of Cuba.

The Helms-Burton Act, with a markedly extraterritorial character, punishes foreign companies that do business in Cuba, and allows entering a lawsuit against companies and individuals that use property expropriated by the Cuban government from U.S. citizens and companies and denies entry in that country (U.S.A.). to directors of these companies.

The renewal of the order is more of the same thing, since the presidents before Obama - Bill Clinton and George W. Bush - had already done the annual extending without ceremonies. So Obama - who, while taking office, preached a new beginning in relations with Latin America - continues, unchanged, in line with his predecessors, ratifying this incongruous legislation.

U.S. policy against Cuba has no ethical or legal support and is contrary to international law. Neither does it have the support of other nations. The blockade of the island has already been condemned 19 times in the annual general meeting of the UN. More than 180 countries and specialized agencies of the United Nations system explain their opposition to this policy.

The direct economic damage caused to the Cuban people by the application of the blockade surpasses, in these 50 years, 751 billion dollars at the current value of that currency. The losses, however, are not only financial, they affect many areas, such as health, for example.

"Cuban children cannot afford the drug Sevoflurane, the most advanced inhaled general anesthetic agent, because its manufacturer, the American company Abbott, is prohibited from selling to Cuba," UN General Assembly Foreign Minister, Bruno Rodriguez, exemplified in the annual general meeting of the UN. This is one of the elements that classifies the U.S. policy on the island as genocide, since many deaths could be prevented without the blockade.

The United States, then, subjects the people of Cuba to lack of development, disease and other ailments, with the objective to force a political change of the Cuban socialist system. For the imperialist superpower, everything that doesn't lead to the establishment of a regime that is subordinated to its interests will be insufficient to end this policy against the Cuban people.

The U.S. blockade of Cuba is criminal and violates the sovereignty and self-determination of the country, which has every right to choose their own political system and way of organizing society. The blockade grossly violates international law and is one more act of the interventionist policy of the United States.

The Brazilian social movement on different occasions has condemned the U.S. blockade on Cuba. Last June, the National Convention of Solidarity with Cuba spoke out clearly against the blockade. The Brazilian Center of Solidarity with the Peoples and Struggle for Peace (Cebrapaz) also held an international seminar in June, the final declaration demands an end of the criminal blockade.

Socorro Gomes, president of the World Peace Council said that the extension of the Helms-Burton Law by Barack Obama "shows what a false Democrat he is and dispels all illusions about the current U.S. administration." Gomes also said that with this gesture, "Obama is the same as his predecessors and is applying to have the same destiny - the trash heap of history."