Member countries of the African Union, which have not yet altrady done so, are called upon to immediately recognize the State of Palestine with East Jerusalem as its capital. 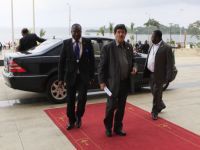 On Friday (8th), the African Union (AU) called their representatives on the Security Council of the United Nations to support the efforts of Palestine for its inclusion in this world organization as a member State with full rights.

According to the decisions of the just-ended 17th Summit of the AU in Malabo, Equatorial Guinea, member countries of this continental organization, which have not yet done so, are asked to immediately recognize the State of Palestine with East Jerusalem as its capital.

This recognition and the status of full member of the United Nations for the State of Palestine must be based on the borders of June 4, 1967 which provide for Al-Quds al-Sharif (Jerusalem) as the capital of this territory in the Middle East, this marked the final documentation at the end of the conference in Malabo.

To this end, the African Union proposes to the UN Security Council to convene an "emergency session" to review the status of the Palestinian State with a view to its adoption at the next ordinary session of the UN General Assembly to be held in September this year at its headquarters in New York.

They further call for the resumption of peace negotiations between Palestine and Israel, and reaffirms their support for a peaceful solution to the Arab-Israeli conflict "based on the principles of international law and relevant resolutions of the UN, with emphasis on creating an independent Palestinian state."

The AU condemned the "inhuman Israeli practices against Palestinian prisoners and detainees" and calls on the Government of Israel to stop its "policy of occupation and aggression" throughout the Palestinian territory.

The AU reiterated its solidarity with the Palestinian people and welcomes the agreement signed for peace and reconciliation between the rival Palestinian movements Hamas and Fatah on May 4 this year, in the Egyptian capital, Cairo. Egypt was praised for having facilitated the signing of this document.

Egypt was equally recognized for the opening of the Rafah border crossing after four years of blockade against the Gaza Strip.