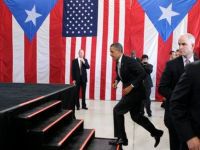 Several anticolonial demonstrations heat the environment in Puerto Rico as President Barack Obama begins a visit in search of gaining support prior to his bid for reelection this coming November 2012.

The official visit of Mr. Obama provoked expressions of condemnation for the colonial situation to which Puerto Rico has been subjected since 1898, when the United States invaded, stated a report from the network Telesur.

Local authorities on Monday arrested five youths climbing on poles by an electric fence and putting banners with messages in English demanding the rights of the Puerto Rican people for their independence and the liberation of political prisoners, said the multi-state news agency.

Also arrested yesterday was the activist, Alberto de Jesus Mercado (Tito Kajak), demanding the freedom of the political prisoner, Oscar López Rivera, who remains behind bars for three decades for fighting for Puerto Rican independence, informed police in the capital.

According to the trade unionist, Isabel Rodriguez, the U.S. president's arrival to the Caribbean nation should be conducive to getting him to listen to the protests of the people.

"I think it's the ideal time to make our concerns known, since we, by being a colony, have neither voice nor vote in the empire, but when Obama comes here, what we can do is have him listen," said Rodríguez.

This is the first trip that a leader of the United States has made to Puerto Rico since John F. Kennedy in 1961.

As part of activities planned on Obama's agenda is a meeting with supporters of the Democratic Party in order to raise funds from this group, which according to estimates, could amount to one million dollars.