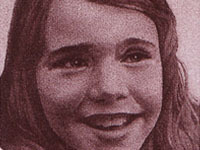 The Cold War between the two superpowers has created heroes on both sides of the Iron Curtain. The West sang praises to "bully" Bukovsky, while Soviet Union put handsome Dean Reed on stage. Only Samantha Smith, an American teenager, has proven popular on both sides of the Atlantic. In Russia she is known even more than at home. To become famous it was enough to write a letter to Secretary General.

To become a hero one needs special circumstances, such as war. Yet, how does one become a hero in peacetime? Putting athletes, singers and movie starts aside, one still needs extraordinary circumstances, for example, saving the lives of others. The fame of the American teenager Samantha Reed Smith has nothing to do with the heroism while risking life or cheap popularity of an actor. In November of 1982, ten year-old Samantha wrote a letter to the Soviet leader Yuri Andropov, and received a reply.

In the 1980's the opposition of the U.S. and the USSR had reached a critical point. The American President Ronald Reagan went as far as calling the Soviet Union "the evil empire." Strategic Defense Initiative (SDI) was unfolded in the skies over planet Earth, which received media's title "star wars". The Soviet Union opened its own space "umbrella". Everyone was scared. Soviet citizens who had reconciled with a deficit stubbornly asserted: "As long as there is no war!" It turned out, the Yankees were afraid no less than the Soviets.

Samantha, an inquisitive girl from a small town in Maine, loved to read adult magazines. They were no third-rate tabloids with stories about the VIPs, but political articles in a serious weekly magazine Time. When she opened a new issue one day she saw an article talking about new Soviet leader, Andropov. She proceeded to read a horror story about the most terrible man on Earth, former head of the dreaded secret service, who, after having firmly established in power, threatens to destroy the peaceful American states and the beautiful American parents and their wonderful kids.

"If everyone is so scared of Andropov, why don't we write him a letter and ask if he is going to start a war?" Samantha asked her mother, and the mother jokingly suggested: "Write him yourself." In her childish handwriting the girl wrote: "Of course you do not have to answer this question, but I would like to know why you want to conquer the world, or at least our country. The Lord made earth, so we all can live in peace without fighting."

"We do not want anything like this. No one in our country - neither workers, nor peasants, nor writers nor doctors, nor the adults nor children, nor members of the government, we do not want any war, big or small," General Secretary of the CPSU Yuri Andropov wrote in response on April 19, 1983. The head of the Soviet Communists invited the American schoolgirl to come to the USSR in the summer and visit the international kids camp "Artek ".

The theory of the joint project of the KGB and CIA called "Samantha" will remain in the conscience of those who believe in the force of some secret springs, the invisible activities of secret societies and organizations. It is not ruled out that the idea of ​​using certain methods of "public diplomacy" came to the smart heads on Lubyanka and Langley, and they could take advantage of a sincere impulse of the child. Since this information was not made public we will not discuss unsupported rumors.

Samantha Smith's visit was broadcasted by Soviet television, her photographs showing her in "Artek", during a visit to Leningrad and a telephone conversation with Andropov, were published by Soviet newspapers and magazines. After Dean Reed and Angela Davis, it was the third American to have acquired fame in the Soviet Union. Unlike them, she was a child. And this was her significant advantage.

We find it hard to imagine certain people old, for example, we cannot picture aged Yuri Gagarin. The same could be said about Samantha Smith. She will always remain a teenager in our memory. Death took her at the beginning of her bright life in a plane crash.

Most likely, the accident was just that, an accident, rather than the tricks of the intelligence services. It was not her untimely death that made Samantha popular. Perhaps subsequent world events would have overshadowed the image of Samantha Smith, as it happened to her counterparts in children's diplomacy - Katya Lycheva, Dean Reed, and Angela Davis, who is still alive.

Her mother thinks that Samantha could have become an actress or a senator from Maine. Maybe Samantha would have become a ballerina or a veterinarian. The girl who gave rise to the movement of "children's diplomacy" and was called the first "ambassador of peace" left this world when she was only 13 years old. Her last words to her Artek friends were: "Let's live!" They became a testament to all the people of the planet.