63 years of the Palestinian catastrophe 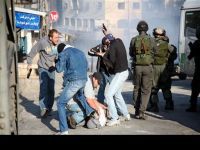 On Monday (16th), the president of the Palestinian National Authority, Mahmud Abbas, declared three days of mourning for the deaths of at least 12 demonstrators marching towards the border of Israel from the Gaza Strip, Syria and Lebanon. "The blood shed for the freedom of Palestinians will not be in vain, because it was shed for freedom and the rights of its people," said Abbas, condemning the violence and repression of demonstrations by Palestinians on Sunday (15th).

Hundreds of Palestinians marched in Ramallah to remember the Day of the Nakba (catastrophe), which recalls the exile and the loss of Palestinian territories with the creation in 1948, of the State of Israel. With flags and banners, people gathered beside the grave of Yasser Arafat in Muqata in Ramallah, to march from there to Al Manara Square, where speeches were made and different actions were taken to mark the 63rd anniversary of the Nakba.

On Monday, the rioting spread to Egypt, where riot police fired tear gas and live ammunition to disperse thousands of pro-Palestinian protesters outside the Israeli Embassy in Cairo.

The demonstrators demanded the right of return for millions of Palestinian refugees to their place of origin, recognized by international law. At midday yesterday, Palestinians in several West Bank cities observed 63 seconds of silence to remember the disaster that represented the creation of the Zionist state.

Meanwhile, another hundred Palestinians protested, throwing stones at an Israeli checkpoint of Qalandia. According to the Israeli Ynet news service, no injuries were reported.

Israel's attacks left at least 12 dead and hundreds injured. Israeli troops fired on protesters in three locations in the deadliest confrontation in years. Regarding the victims, the President of the Palestinian National Authority said that "the people's will is stronger than the power of oppressive forces."

The demonstrations take place every year. Drums, Palestinian and Arab patriotic songs and a parade of uniformed boy scouts decorated the streets, in which Palestinian officials, workers, students and residents paraded in the refugee camps on the outskirts of the West Bank administrative capital and seat of government of the PNA.

Israeli forces opened fire in three different regions - on Israel's borders with Syria, Lebanon and the Gaza Strip. Lebanese security sources said more than 100 people were injured during the incident in the border town of Maroun al-Ras.

In the commercial center of Israel, a truck driven by an Israeli Arab was crashed into vehicles and pedestrians, killing one man and injuring 17 people. Witnesses said the driver, who was arrested, lost control of the truck in the middle of traffic in the city center.

In Jerusalem, a Palestinian teenager was shot dead during protests last Friday. Police said it was unclear who shot him and they are investigating. The incident occurred in the neighborhood of Silwan in East Jerusalem, where violent incidents occur frequently. The Palestinians claim east Jerusalem as capital of the Palestinian state which includes the West Bank and Gaza Strip.

On Israel's southern border with the Gaza Strip, according to paramedics, Israeli gunfire wounded 60 Palestinian demonstrators as they approached the border between Israel and the Hamas-controlled enclave.

In the Golan Heights, occupied by Israel since 1967, many Palestinians and their supporters who live in the country came to the border with Syria to protest. In response, Israeli security forces, that were reinforced on Sunday, fired on demonstrators leaving many dead and injured.

At least 15 Palestinians were wounded by gunfire from Israeli Armed Forces in the northern Gaza Strip when thousands were participating in a demonstration. The victims are mostly minors, injured by shrapnel from Israeli tank fire against the Palestinian town of Beit Lahiya. Information was provided by the spokesman for the emergency services in Gaza, Abu Adham Selmeya.

The protest involved thousands of people who marched in the northern Gaza Strip towards the border area with Israel. They said Israeli tanks stationed in the area fired at least four shells at the site of the demonstration.

At a rally in Gaza City, which was attended by approximately 10,000 people, the Hamas leader, Ismail Haniyeh, said the Palestinians have a right to resist Israeli occupation and recover the properties lost in 1948, informed the Israeli news service Ynet.

This is the first year since 2007 that the two Palestinian groups are united in the Gaza Strip to organize joint actions in memory of the Nakba, which was made possible after the signing of the Palestinian reconciliation, held earlier this month in Cairo.

Hamas, in cooperation with Fatah, organized the two major events. The first was held in the northern Gaza Strip and the second in Rafah, on border with Egypt. In addition to the demonstrations in Israel and the Palestinian territories, great events are also planned for Egypt, Jordan and Lebanon, home to hundreds of thousands of Palestinians.

The Hamas spokesman, Sami Abu Zuhri, qualified the attacks as a "turning point in the conflict between Palestinians and Israelis" and reiterated the commitment to end the occupation of Palestine by Israel.

Syria condemned the Israeli attacks against Palestinians in the occupied territories in the Golan, Palestine and south Lebanon, and denied attacks of the local police against protesters in trouble spots. The Ministry of Foreign Affairs of the country qualified the shots fired by Israeli soldiers as criminal acts.

The Damascus government has demanded that the international community fully blame Tel Aviv for the violence, and reiterated that Syria has and will always support the Palestinian people and their resistance struggle for their legitimate rights.

On Monday (16th), Palestinian and Arab leaders denounced the repression by the Israeli occupation forces against protesters who remember the Nakba. Most of the victims were Palestinian who had taken refuge in Lebanon since their relatives were driven from their villages and original territories in 1948.

A spokesman for the Lebanese army said that ten Palestinians were killed when Israeli soldiers fired live ammunition against demonstrators who were defending their throwing stones and trying to knock down the fence that separates the territory of Israel.

The Lebanese MP Hassan Fadlallah described as a violation of human rights the "Israeli aggression on unarmed civilians in Maroun al-Ras and in the Golan," and pledged that the Lebanese resistance movement, Hizbullah, will continue to defend the Palestinian cause."