Discoverer of anti-flu drug dies of hunger in poverty 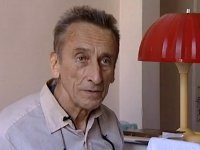 Janis Polis, a well-known pharmacologist, the discoverer or antiviral drug Remantadine, died in Latvia. In three months, he would have turned 73. Olainfarm, the manufacturer of Remantadine, makes millions on the drug, which Polis invented. The scientist himself, however, died of undernourishment, or hunger, to be more precise.

The Latvian press has repeatedly attracted public attention to the scientist and his miserable existence, in which he had found himself. The man discovered the drug, which helped a lot of people. However, it turned out that there was no one who could help the scientist in difficult times of his life.

The pharmaceutical companies that make millions on his drug, did not even bother to pay him some 200 lats a month to support the man who made them rich.

Polis's Remantadine is used in many countries of the world as an antiviral drug to treat and prevent the flu infection. The drug prevents the penetration of the virus into epithelium cells of the respiratory tract. The drug has been the only efficient anti-flu medicine for a very long time. In addition, Remantadine was used in the therapy of Parkinson's.

The patent for the synthesis of Remantadine was obtained by a group of specialists under the direction of Janis Polis and Ilze Grav in 1969. In 2008, the World Intellectual Property Organization (WIPO) awarded Polis for his innovative research in the field of medical chemistry, and particularly for the discovery of Remantadine.

How did it become possible that the pride of Latvian pharmacology died of hunger and poverty?

In medicine, a patent lasts for 17 years. The pharmaceutical companies that have been producing the medication since the beginning of the 1990s, have not paid anything to the elderly scientist.

"In the West, Polis could become a millionaire during those 20 years, while his patent was in effect. In Soviet Latvia, the scientist received the State Award. He bought a car for himself with that award, while his institute received extra funding. In independent Latvia, Polis was receiving a small pension. Moreover, the authorities evicted him from his apartment of the denationalized building within the scope of restitution," Grani.lv website wrote.

As a result, the scientist became homeless and ended up in a rest house.

It is worthy of note that Latvia is a member of the European Union. However, as it turns out, its nationals die of hunger in social facilities. How can this be possible? Has anyone asked the administration of the facility about that?

As for Janis Polis's sons, one of them is a media tycoon. Let the death of his father lie heavy on their conscience, which the men do not have, as it appears.

A month before his death, Polis asked for financial support from Olainfarm - the enterprise, which manufactures Remantadine. The scientist only received promises in return. He told his friends that the owner of the enterprise, Varely Malygin, at first promised him that he would solve the problem personally. Then he promised that his assistants would look into the matter. Assistants also promised to help.

On March 19, 2011, the scientist was hospitalized in critical condition. As it turned out, the man was simply exhausted with undernourishment. The doctors of the hospital were shocked to see that the man who had saved so many people's lives, was leading such a miserable life.

"How can Latvia teach others to struggle against poverty if our pensions are smaller than the living wage, and if we are the leader in the EU in terms of the unemployment rate?" the Latvian press wrote.