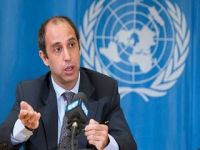 The United Nations Reporter, Richard Falk, said that Israel carried out ethnic cleansing in Palestine. Ethnic cleansing, apartheid and colonialism are the actions that Israel has practiced in the Palestinian territories, the United Nations Reporter for the Occupied Palestinian Territories, Richard Falk, said Monday through a report that was presented at the Human Rights Council of the multilateral agency.

The speaker defined the Israeli behavior and actions as acts of "ethnic cleansing and apartheid," because of the restrictions, massacres and wars that originated against the neighboring people.

The Falk report was delivered to the UN Human Rights Council in Geneva (Switzerland), in order to highlight the level that Israel has had in fulfilling the obligations which come from international law regarding the situation in the occupied territories.

Falk uses words in the document such as "annexation, ethnic cleansing, apartheid, colonialist and crime" in order to adequately describe "the real nature of the situation prevailing in the occupied Palestinian territories," he said.

Similarly, he said that expansion of Israeli settlements and the forced eviction of Palestinian residents have not stopped, as the government of Shimon Peres, in East Jerusalem, is creating "an intolerable situation."

"Israeli settlers have taken over Palestinian homes and expelled the Palestinians from their homes for decades and generations, while the Israeli authorities support their illegal actions," said the UN Reporter.

The term "apartheid" is not linked specifically to the racist policies that were implemented in South Africa, but today is a crime associated with any institutionalized systematic oppression of one racial group over one or more racial groups and with the intention of maintaining that regime," he said.

Falk, in this regard, suggested to refer the case to the International Criminal Court to confirm the definition of apartheid as well as clarify whether the continued practice of illegal settlements and expulsions in East Jerusalem can be considered ethnic cleansing.

As for "the persistent refusal of Israel to allow the Special Reporter to visit the Occupied Palestinian Territories," Falk said that "this cooperation must be understood as a fundamental legal obligation inherent in membership in the Organization."

Given the lack of Israeli cooperation, the reporter asked the Human Rights Council "to make one more attempt" to force Israel to comply with Article 104 of the Charter of the United Nations. That article states that the UN and its members "shall enjoy in the territory of each Member such legal capacity as may be necessary for the exercise of its functions and the fulfillment of its purposes."

The UN Reporter believes that Israel is unwilling to make an account in a credible form, because in addition to denying entry into the Palestinian territories, it has not responded to allegations made in reports on the Israeli offensive in Gaza and attacks on the humanitarian flotilla.

"So the international community begins to have a strong impression that there is a lack of political will to implement the recommendations based on reasonable conclusions that Israel has been guilty of gross violations of international humanitarian law and international criminal law" he said.

"There is a feeling that no one wants to implement the recommendations. There is a widespread perception of impunity encouraged with regard to the conduct of Israel," emphasized the reporter.

"This attitude of non-cooperation with official missions of the Human Rights Council should lead this body and the Office of the Secretary General to take concerted action to do everything possible to ensure the future cooperation of the government of Israel," Falk concluded.