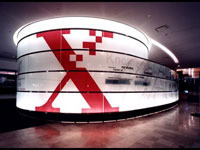 Since Stalin's time, or to be more exact, since the period of struggle with the "worship of western technology," the Soviet Union had been very actively promoting the idea that many technological advances were initially the result of mad genius of Russian scientists, engineers and Russian talented scholars. It was the Russians who invented this and that before the Europeans have done it, it was the Russians who were the first ones to do something special, etc. However, there are certain achievements that Russians can be indeed proud of. The device that is called Xerox today is the invention of a Soviet physicist.

It is ingrained in the mass consciousness that the copier is the fruit of design of a Xerox engineer. Those who know will correct those who do not and tell them the story that happened on October 22, of 1938, when an American Chester Carlson obtained a copy of a booklet cover of the New York hotel Astoria which housed his lab. Mr. Carlson has done it by electrifying a plate of semi-crystalline sulfur by friction and lit it through the film bearing the image. Since sulfur is a photoconductor, the currents that were created discharged the illuminated areas of the plate. After the light exposition the engineer covered the plate with the powder containing the opposite charge, and the image hidden before has appeared on the surface. Chester Carlson was the first person in the world that has made, as they said, a dry photo.

What does the Soviet inventor have to do with this? The American did it without special equipment, and even the idea itself was not the result of brainstorming.

Physicists had known about the triboelectric effect for a long time. With a small difference in time a similar experiment was conducted by a Bulgarian physicist Georgi Nadzhakov who worked at the Paris Institute of Marie and Pierre Curie. In 1944 ancient languages researches at a University in Ohio offered to call it in Greek - xerography.

According to not very reliable information, in 1947 the right for dry photography was allegedly purchased by "Haloid" company from Rochester which specialized in the manufacturing of photographic paper. Yet, xerography did not receive a widespread recognition at the time.

The idea of copying, which Vladimir Fridkin for the lack of a better word called electrophotography, came to this young graduate of the Physics Department of Moscow State University when he was reading physics journals describing experiments of Chester Carlson and Georgi Nadzhakov. After a series of not entirely successful experiments in the fall of 1953 he started to obtain first copies of documents and half-tone photographs.

The director of a small establishment that took shelter in the dilapidated houses behind the Textile Institute ordered to make a mockup of the first electrophotographic apparatus - EFM-1. The abbreviation stood for an electro-copying machine. Digit 1 meant that the experiment would be continued, and the device would be improved. Despite the rudimentary mechanics, the effect was startling.

A meeting was conducted at the Institute that was visited by the minister of communications. Following the meeting in Vilnius the Institute of electrocardiography was founded that was immediately classified. In the capital of another sister republic - Chisinau - one of the plants was converted into EFM production. While the West was busy inventing names for a non-existent apparatus, the USSR produced this device without naming it a copier.

In 1961 the American company "Haloid" was renamed Xerox and launched the production of the first models of the copier. They worked on a different principle than the Soviet one. However, Fridkin's idea seemed interesting to Chester Carlson. In June of 1965 the American visited his counterpart. Chester and Vladimir were photographed on the background of the EFM.

Copiers manufactured in the West were very rare and were placed only in critical facilities. They were stored in specially protected rooms, and each copy was registered in a special logbook. In the Soviet Union there were no prospects for the development of industrial copiers.

In his autobiographical novel Vladimir Fridkin recalled that he was not surprised when a lady from the first division of the Institute came into his office and very politely explained that he must surrender his own machine.

"Surrender?" I asked. "You know, this is the first copier in the world!"

"I know," the lady replied. "But you have no right to keep it in your room. In your absence strangers may come in. "

The copier was dismantled and taken to the dump.

The inventor was remembered in the years of perestroika. Fridkin was invited to the USA and was awarded a Medal of the American Photographic Society for a significant contribution to the creation of copying technology. In 2003, Fridkin received an award from the International Committee of photographic science for an "outstanding contribution to the development of unconventional (non-silver) photographic processes and international cooperation in this area". The Berg Award presented to Fridkin indicates that the scientific world has acknowledged that the copier was invented in the USSR, and not in the U.S.