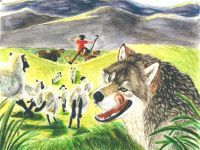 In one of the best known tales of the literature attributed to Aesop (620-560 BC) was a small shepherd who for fun liked to trick the neighbors often shouting the word "wolf" in allusion to an attack of the animal on their herds of sheep. Faced with the threat, many colleagues rushed to help him and discovered that no risk existed. With no remorse, he responded with arrogance in front of those that had been prepared to help him, returning to repeat the joke until one day it ceased to be fiction and became a reality. Attacked by the wolf, the shepherd was abandoned to his fate, leading to the moral of the story: Nobody believes a liar even when he is telling the truth.

More than a simple "bottom line" that can seem out of place in a discussion of international politics in the twenty-first century (or the Arab revolts and foreign policy in many countries), the trajectory of the shepherd and the wolf is recurrent in politics, see the use of the lie as truth coupled with fear and exaggerated threats.

Coupled with political speeches and actions regardless of the country and circumstances, great humanitarian tragedies, wars and oppression tend to be justified from the metaphor of the wolf. In this context, the metaphor is embodied in the figure of a certain group of people by their origin, religion or ethnicity in a political party by its ideology, thereby allowing the silent acceptance of phenomena such as genocide, invasion and military repression, and the restriction of human rights.

Many are the faces of enemies, internal and external, depending on the nation and the moment. But it is possible to detect an interesting pattern now, whose origins are located in 11/09/2001. Since the terrorist attacks on the U.S. mainland, Al Qaeda has become the source of several acts of violence and insurgency. For the United States and their Western European allies, Bin Laden and Al Qaeda, have taken shape as the main enemy of their "democracies."

Defined as a greater threat to world order, the group gave rise to interpretations of the spread of transnational terrorism, the dispersed cells and decentralized command, an octopus with tentacles that pervaded, without limits or boundaries, all countries and societies. This "web," according to U.S. assessments, extended even to South America, the porous region of the Triple Frontier of Brazil, Argentina and Paraguay, and financing the paramilitaries and Colombia's drug lords, who were renamed as "narco-terrorists."

Two disputes were initiated under the aegis of the Global War on Terror by Bush, Afghanistan (2001) and Iraq (2003) and that, in Iraq, the fable was rebuilt. The "bottom line" was rethought, to lapse into a popular saying: that lies, if often enough and big enough, become true, even for those who told them.

Before the invasion of Iraq in 2002, about 90% of Americans believed that Saddam Hussein was an agent of Al Qaeda and, in partnership with Bin Laden, was responsible for 9.11. The Commission studies of 9.11, the book "Against All Enemies" by Richard Clarke (2004) who contested the allegations of W. Bush on the attacks and the absence of a conclusion about the episodes involving anthrax that followed the 11/09, sought to overcome these uncertainties and reassess, after all, who would, or were the enemies of America, but they were dismissed.

On this occasion the British academic Fred Halliday (1946-2010), London School of Economics, warned of the risks of self-induced panic, which mystified Al Qaeda. For Halliday, the allegations made it difficult to understand a specific political phenomenon, just giving the elusive Bin Laden violence for violence.

Though Bin Laden should primarily be remembered as having been "trained by the CIA," the post-11/09 rhetoric threw a pall over the origins of this movement from the years 1970/1980, from triangulations of U.S. diplomacy with the fanatical insurgents and pressures on the Soviet Union (USSR), which resulted in the Afghan War (1979/1989).

Factors such as the Iranian Revolution (1979) and the Iran-Iraq War (1980/1988) also were part of major U.S. policy toward the Middle East that, in some nations, sought to conceal what is defined as the "green wave" (the Islamic fundamentalist revolution in Iran), and in others, allying itself to the so-called "freedom fighters," regardless of their radical orientation (as in Afghanistan).

While many allege that this was just another U.S. attempt to replace the Soviet enemy with another counterparty, the characterization of Al Qaeda and Bin Laden as "threat number one" was to consist of a general explanation for U.S. demands, as well as the West's coercive policies and social measures.

Presented as an exception, increasingly these regulations seem to be the rule, see the latest extension of the Patriot Act created in 2001 to combat terrorism.

On February 25, 2011, on the eve of its expiration, the Patriot Act was renewed, once again, temporarily, for three months by the Obama government because of pressure from Republicans and the intelligence and national security community. As provisions for renewal, after three months it may be extended for another year, to continue the monitoring of citizens and access to personal information of suspects.

While the world was absorbed by the movements that appeared to be democratic in the Middle East, which now the only one defended by the U.S., the American model contradicted its best recommendations. Rather than increasing the risk of domestic terrorism and domestic biases, the shadow of Al Qaeda was the justification for this latest reissue.

There most likely has been interference and / or external motivation in many of these riots, including those that are underway. Certainly, but not only of Al Qaeda or the U.S., but multiple political, economic and strategic interests, in a key region for the global energy dilemma.

Lack of understanding of this intricate game of power, or attempting to de-legitimize it by assigning it exclusively to freedom fighting actors as always discussed, but little known, involves not only prolonging the instability, but to put into question the future of these politico-social regimes. After all, one cannot fail to find "curious" that one of the few points that will unite East and West in this recent period, Obama, Mubarak and Gaddafi is through the wolf, Al Qaeda.