Libya the big fraud in play

U.S. blames Iran and Libya for demonstrations and fall of allies in the Middle East, and in retaliation plans to destabilise Ahmedinejad and Khadafy.

By Khatarina Garcia and Peter Blair 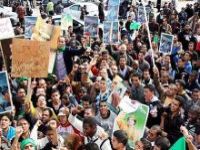 After damage was being assessed after nearly a month of demonstrations in the Middle East, where they almost lost their political hegemony and are running the risk of a fall of strategic influence in the region, the United States through the CIA, the Pentagon and State Department, are holding the leaders Muammar Khadafy of Libya and Mahmoud Ahmedinejad responsible, and are holding Iran mainly responsible for the wave of protests that are brewing with the collapse of major U.S. allies in the region.

Considered by Arabs and Persians the only two existing democracies in the Middle East and Persian Gulf, Iran and Libya have governments and policies that threaten U.S. hegemony in the region. They do not accept the concept of subordinating their people's national interests to North American politics and after their respective revolutions, they cut ties with Washington and expelled companies that had business in their respective countries.

Many times the security and intelligence services tried to assassinate Muammar Khadafy and Ahmedinejad as the only alternative to change their regimes, through operations funded by the U.S. government and the U.S. military industrial complex.

In a press conference, the spokesman for the U.S. State Department, Philip Crowley, reiterated the words of President Barak Obama in which the opposition suggested their support for Ahmedinejad and Khadafy, so they desire retaliation for the political defeat suffered by Washington in recent weeks and the fall of the governments of Egypt and Tunisia.

The difficulty however, mainly in Libya, is to find conditions for holding demonstrations against Khadafy, considering that their own intelligence services have already informed Washington that the Libyan government has popular support and the total population has in mind the bombings carried out by the Reagan administration where dozens of Libyans were murdered in cold blood by U.S. attacks, including a daughter of Khadafy.

On Thursday (17), Ashur Shamis, a Libyan opposition activist living in London and recruited by British intelligence (MI6) and American (CIA) was given information passed by the U.S. embassy in the United Kingdom and admitted, in an embarrassing form, that they have been using images of the protests in Bahrain and Yemen as if they were held in Tripoli and Benghazi, Libyan major cities, which unmasked the action mounted by the media and organs of communication who are working together against Libya and Iran

The U.S. Congress authorised the White House to double the amount approved in the 2011 budget for expenses related to propaganda, disinformation and media against leaders who oppose U.S. interests worldwide, as is the case with Muammar Khadafy Mahmoud Ahmedinejad, Hugo Chavez, Evo Morales, Rafael Correa, Raul Castro, Daniel Ortega, Cristina Kirchner, Fernando Lugo, Kim Jong II. Resources would be used to buy space in the media of these countries ruled by these leaders in newspapers, radio, magazines and television networks. They should always refer to them as dictators and always receive directions from the Press Attachés in their respective countries or if there is a snag in any diplomatic relations with them, from CIA agents in the country.

The total project budget is one billion dollars, but to Brazil only 120 million were allocated for such action.

Last week there was a joint meeting between representatives of the CIA. The Central Intelligence Agency, State Department and Defence Department agreed that besides the funding for the actions against Khadafy and Ahmedinejad in their respective countries, millions of dollars would be transferred to opponents to allow them to organise demonstrations and start a world media campaign against the two and also seek to involve their Latin American allies to bring opposition parties to support U.S. positions.

The use of worldwide media images of demonstrations in Bahrain, where the U.S. Fifth Fleet is parked, and Yemen, another ally of the White House, as though the demonstrations happened in Tripoli and Benghazi, which happened, but to support the government of Khadafy in Libya, partly burned the U.S. plan against Libya. Yesterday Libyan students around the world decided to organise demonstrations in support of Khadafy and the Libyan government.

The secret services of the U.S. and other countries decided to infiltrate agents to create provocations and disrupt them. And as a way to undo the demonstrations, the CIA and the Press Attachés in U.S. embassies were responsible for spreading news with counter propaganda, publicising in the media of the world that students are being forced to support Khadafy under penalty of losing their scholarships to study, thereby initiating the plan that is coordinated by the White House itself.

Photos and images disseminated by means of alternative communication and a group of European students who are returning from Libya in the World Social Forum in Dakar, Senegal, support and show the veracity of statements by the Libyan government and Khadafy, considered a threat to the North American system. Starting with the power the student movement and Libyan youth exert, they virtually run the country's universities after Khadafy pursued his Cultural Revolution.

The United States also accuses Khadafy of being behind the demonstrations, prohibited from being spread in the U.S. by Patriotic Decree, carried out daily for forty (40) days in Puerto Rico by students who demand freedom of expression and public education in that almost State which ended up becoming a North American colony.

The control of news in the West about what is happening in the Middle East is so great that in all the demonstrations, from Tunisia and Egypt, U.S. flags, pictures of Obama and also George Bush are burned, but all these images are withdrawn by news agencies and television networks, controlled by the White House.

Photo shows support from the Libyan people to the government of Muammar Khadafy in TRIPOLI and used by the Western press as if it were contrary to Khadafy.