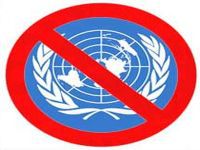 Cuban Revolution leader, Fidel Castro, affirmed here that the United Nations (UN) is a fraud since the United States has the last word there. The United States is stained with blood, said Fidel Castro during the second part of a meeting with intellectuals who were participating in the Twentieth International Book Fair in Havana, on the radio and television program, Mesa Redonda. Fidel Castro emphasised Washington's disproportionate influence in this world body.

He stressed that when an individual is in front of this body or some agency belonging to it, and does not respond to the interests of the American administration, they are removed.

He recalled that the last votes taken at the UN on the trade, commercial and financial blockade by this northern nation against Cuba condemned the existence of this siege, and yet nevertheless, Washington completely ignores it.

"For me, the position of governments has value, the courage that is required for this, 20 from Europe gave explanations for their vote in opposition to the blockade," he said.

However, they might spend 20 years condemning the blockade, and what do the Yankees care about that, he wondered, referring to the American administration.

He said that it does not serve the United Nations that they cannot even say that genocide is illegal and point to what the United States is doing when that country produces more food and is closer to Cuba while putting so many restraints on trade with the island.

The Revolutionary leader stressed that for the United States, Cuba is a terrorist country and added that not one American has ever died at the hands of Cuba as a consequence of a bomb, neither has there ever been a single case of torture.

At the meeting, Fidel Castro referred to the moments of the revolutionary struggle in the archipelago and also recalled the crimes committed by the U.S. government in Latin America, among them the assassination of Nicaraguan leader Augusto Cesar Sandino.

The intellectuals, in turn, expressed their opinions and concerns around issues such as the popular uprisings in the Middle East, the functionality of international organizations and the imminent dangers to mankind.