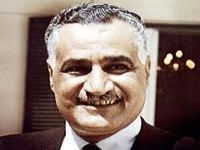 Suddenly, from nowhere, the Egyptian people took to the streets in defiance of tyranny and the terrorist police of Hosni Mubarak. The columnists have written texts that sound melodic in the ears of Western liberals and, missing more, the revolution inspectors penetrated into the slippery context, losing their way and distorting history, prevaricating it to a certain way.

One aimed to say that Gamal A. Nasser (1918-1970), father of the modern Egyptian nation, was hanging Communists.

Be grateful to the Twitter generation. What tin plating! History ... The potential of this second phase of the Egyptian revolution are seen without the burden of the first (1953-1970), and Nasser's legacy disappears in the analyses that associate the rebellion with the power of new communications technologies.

Did the consciousness of Arabs begin with the Internet? The news agencies imagine that the current uprising is not against Washington, but against the ugly Mubarak, who apparently, if he does not die first, will go away when Washington, and not the crowd, so decides. Or perhaps the torturer Suleiman replaces him. The important thing is to speak about democracy, not imperialism, in the country that for 30 years represented their interests.

Insurrections abound, revolutions are rare. Major uprisings have always had to contend with constituted armies. And so, when compared to the demonstrations, guerrilla actions and strikes that erupted after the military defeat of Egypt in the first of the wars with Israel (1948), a military group led by Mohamed Neguib and Nasser (Free Officers) admitted that they had gone ahead with unserviceable weapons supplied by the British.

The revolutionary tide reached its peak in January 1952 with a general strike, workers and students clashed in the streets against soldiers and loyal fascist gangs paid by landlords, as well as religious fanatics. Reaction or revolution. In his book Philosophy of the Revolution, Nasser stated that Egypt could exist again, and acknowledged that the main battle was not in Palestine but with his people.

The monarchy fell on July 23, 1952. The republic was proclaimed and in July 1953, Nasser shook off the right wing sector of the Free Officers, represented by Neguib and supported by the Muslim Brotherhood. A year later, he arranged the evacuation of British troops occupying the canal zone.

The economic boycott by Great Britain and the United States so that the Egyptian government would not build the gigantic Nile dam at Aswan, led to the nationalization of the Suez Canal. To prevent this, Israel was allied with France and Great Britain (1956). Nasser defeated the colonial aggression, but Israel occupied part of the Sinai Peninsula.

In the flaming movement of Non Aligned countries (Bandung, 1955), Nasser's victory over Zionism projected him as the undisputed leader of the Arab world. Cairo became a Mecca for the revolutionaries of the Middle East and Africa. Nasser supported the Algerian struggle, and welcomed the independence of Tunisia, Sudan and Morocco (1956).

The Egyptian revolution hit a quality leap (1956-58). Then, the left (who by their opposition to the revolution were circulating in secrecy) concluded that Nasser was more than a bourgeois nationalist. The concept of non-alignment against the great powers, could help overcome the fossilised premises of western Marxism. 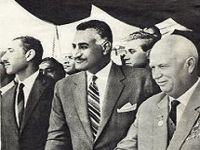 In May 1962, at the National Congress, Nasser read the famous National Action Charter. The sixth point of the letter was about the inevitability of the socialist solution. But five years later, Israel became America's favourite pawn. The Zionists reoccupied the Sinai again. Nasser ordered several ships sunk in the Suez Canal and the strategic route was unusable until it reopened in 1975.

The unexpected death of Nasser (1970) represented a devastating blow to the Egyptian revolution. Vice President Anwar Sadat succeeded him in office, and turned the course of the process. In the Camp David Accords (1979) Sadat was subordinated to Israel and Washington in the Middle East.

He did not pull free. A traitor and a lackey Zionist, Sadat was assassinated in 1981 by the Muslim Brotherhood. And the tyrant Mubarak, chief of police, rose to power.

Today, the army announces that the Egyptian people will get all of their demands, which hopefully means the departure of Mubarak and Suleiman.