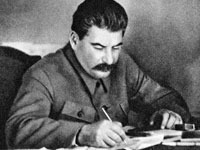 Stalin did not sign the order to send prisoners of war to concentration camps, Maj. Gen. Alexander Kirillin, the head of the Defense Ministry's Department for Commemorating Soldiers Killed in Action, stated.

"It is believed for some reason that at Stalin's order all POWs were branded traitors and their families were subjected to reprisals. I have never seen such documents," Kirillin told reporters at the Nauka XXI Foundation for Assisting Security Studies.

According to the general, out of 1 million 832 thousand Soviet citizens, who returned from German captivity, 333,4000 people were convicted of collaboration with Nazis. The official believes that it is important to find out to which extent the convictions were fair.

"If people were convicted legally, we will close this information. If they suffered unfairly, one should strive for their rehabilitation and their relatives should be notified appropriately," Kirillin said.

The official shares the point of view of historians about Joseph Stalin's negative attitude to POWs. First and foremost, it was explained with large-scale failures in the beginning of the war, when thousands of Red Army soldiers found themselves in captivity.

"Both Stalin and the Soviet administration were guilty of that. It's also a huge tragedy that hundreds of thousands of people died because of shortage of water, food and medical supplies," Kirillin said.

According to the general, the commanders of the POWs would normally report about such military men as missing. "According to official information, only 100,000 people were listed as POWs out of over five million of those who were listed as missing during the history of the war. This de facto makes 4.5 million people. In other words, the majority of those bearing the status of missing in action were prisoners of war. Everyone knew that, and I am sure that Stalin, Molotov, Shaposhnikov, Zhukov, Antonov and Vasilevsky were aware of that," Kirillin said.

The general reminded that there was an order from the Commander-in-Chief, in accordance with which the death notices sent to relatives stated that a military man devoted to his duty and socialist Motherland had gone missing. The relatives would then use the notice as a petition to receive financial allowance from the state.

Alexander Kirillin believes that Joachim Hoffmann, a German historian, who said in his book "History of the Vlasov Army" that all Soviet citizens, who returned from German captivity, were subsequently killed in concentration camps, was wrong in his affirmations.

"There were profound investigations conducted indeed, there were camps in which people were interrogated, but no one destroyed prisoners of war deliberately," Kirillin said.

When the Russian translation of Hoffmann's book was published in Russia, the preface to the book said that it had been written "on the base of principally new positions." As a matter of fact, those new positions reflected fascist sentiments. There are still many of those who equate Hitler and Stalin. Accusations of totalitarianism do not target Stalin at all. Such claims appear to set the public opinion against the strong Russia - the country that had risen from her knees.

It seems that they at first had to make a monster out of Fuhrer to compare him to the the Soviet leader. It is amazing that as soon as someone dares to cast doubts on Joseph Stalin's thirst for blood, when absurd accusations follow immediately. The feuding parties have to label each other to defend themselves instead of conducting a reasonable discussion on the subject. As a result, they simply ping-pong unfounded accusations to one another.

It looks like Major General Kirillin will have to deal with a crows of anti-Stalinists, because he took the liberty of claiming that Stalin was in blood up to his knees, rather than to his chest.

They use various legends to exemplify bloodthirsty views of "the father of all nations." Lady Astor, Britain's first female MP, asked Stalin once when he was going to stop killing people. "As soon as there is no need to," he supposedly replied.

According to another legend, Lady Astor told Churchill once: "If you were my husband, I'd poison your coffee!" To which Churchill immediately replied: "My dear, if I were your husband, I'd drink it."

Those who utterly hate Stalin believe these jokes. They do not want to analyze archive documents because they do not want a different Stalin. They would rather have Stalin, the leader of the nation that defeated Nazism, as Hitler's associate. The goal of those forces is to brainwash new generations. If they succeed, we will probably hear them saying some day that Russia deserved the punishment of Nazism.