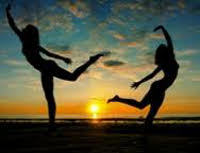 The word "nudism" normally causes embarrassed smiles. Although the lack of clothing is the brightest characteristic of an ardent nudist, the trend is based on the entire philosophy. Nudists call for strengthening of the body and spirit, and living in harmony with nature. Public nudity, in their view, encourages self-respect, as well as respect for others and the surrounding world.

Along with morning exercises, socialist ideals gave mankind nudism - the brainchild of a German teacher Adolf Koch. The new trend emerged in Germany between the two world wars. The first public manifestation of naturism disappointed the onlookers, but that was only the beginning. The best days of the world of nudism were still ahead.

The first naturists considered themselves no less than revolutionary vanguard of militant proletariat. In the 1920s the followers of naturism or nudism were inspired by then trendy ideas of social democracy and communism. It was revolutionary and fashionable, and only later hypocritical morality of "bourgeoisified" socialist society was silencing the history of the first glorious years of formation of nudism. In the Russian language the word "nudism" comes from French, where "nu" means "naked." However, in Germany, the home of social democracy, nudists talk about Freikörperkultur, or "Culture of liberated body." Feel the difference.

A teacher Adolf Koch was born in 1896. He was a charismatic, though not undisputed leader of the leftist fans of the German nudists united in the "Confederacy of Free People." His innovative teaching experiments in naturism and a healthy lifestyle could not help but cause the interest of the liberal circles of Berlin on the one hand, and fierce resistance from right-wing opposition, and on the other.

Fierce attacks from the right wing were perceived by leftists as wrong, and only improved the reputation of Koch in their eyes. Several thousands of young socialists in Germany subscribed to and read brochures with democratic essays of Koch. Due to the influence of Koch's personality, in the late 1920's nudists first joined the socialist movement, and then the leftist movement. Of the hundreds of thousands of fervent supporters of the "culture of the liberated body" who lived at the time between the Baltic Sea and Lake Constance, 60, 000 belonged to the international socialist workers' movement.

However, the reputation of nudists in other fraternal organizations of the socialist wing was far from great. Both the rank and file party members and trade union bosses too often were critical of the nudity which, in their opinion, resembled apolitical whim of sun-worshipers, replacing the struggle for the liberation of the proletariat elementary with basic instinct. Such accusations only attracted even more people to the ranks of socialism supporters.

Certain people demonstrated their uncompromising attitude in the struggle. They argued that working people should be persistent and weather-beaten.

Working people should have nerves of steel and have outstanding energy. All these qualities were needed for the proletarian class struggle against the oppressor who was eating well and sleeping comfortably.

To win against the sleek bourgeois consuming foods rich in vitamins and leading a healthy lifestyle, the working men had to strengthen their body and spirit. Down from the stuffy plants and factories and into the wild! Down with the working cap and overalls! In short, it was only the socialist movement of naturists that could prepare the proletariat for future battles, bringing it into a proper physical shape. The most ambitious programs of physical and spiritual "liberation of the proletariat" were sports schools constructed or inspired by the members of the society of Adolf Koch. However, in these schools the pathos of the class struggle has played a much more minor role.

Based on the research conducted in these schools, doctors have developed a scientific method to strengthen the physical health of each student based on an individual program, taking into account individual physical condition of a student. The trainings were held under the supervision of teachers in small groups of 10 to 12 people. Morning exercises began with a daily washing. Every morning, everyone was required to use a massage towel. Boys and girls were swimming, doing gymnastics and sunbathing totally naked together.

Even outside Koch's school, outside of Berlin, outside the German Reich, naturism and nudism were widely recognized by advocates of socialism.

Nonetheless, nude men and women immediately became a tourist attraction in the German capital for local and visiting philistines. Sometimes there were comic situations. On the day of Holy Trinity in 1929, nudists from Saxony scheduled an event similar to the contemporary flash mob in the district of Zwickau-Planica. People learned about the upcoming "show" from the newspapers, which resulted in a steady flow of onlookers, including those from neighboring regions. On Sunday morning, on a large religious holiday, instead of serving in the temples, crowds hurried to look at nudists. However, instead of lewd scenes, their saw the following picture: on a grassy lawn, there were approximately forty to fifty people who have carefully folded their clothes, and were doing pushups, squats and other exercises. There was a crowd of a few thousand people waiting for some kind of orgy and somewhat disappointed with its absence. Sometime later the police showed up and asked the crown to disperse. As you can see, the first peep show was free.

Police and judicial authorities were not always on the side of "liberated people." At least there were cases when nudists engaged in gymnastics exercises were dispersed, especially when these activities were conducted in public and were not previously permitted. On August 18 of 1932 Prussian police received a guidance document which, inter alia, explained the unacceptability of "public nude bathing or swimming in indecent clothes." Violations were punishable by a fine.

Exactly 75 years ago, on a wave of enthusiasm around the ideas of socialism, an extravagant and ambitious project emerged. Returning back to nature was declared a breakthrough into the future. Creation of a "new man" would turn into getting all sorts of vices from the bottom of muddy ooze. The ban imposed on the "culture of the liberated body" only postponed the solution of the issue. Nudism has finally won after the sexual revolution. Socialist ideals gave to mankind not only naturism, but also morning exercises.