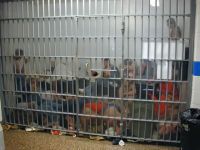 In recent years, we have all witnessed a growing clamor of the people wanting to adopt tougher measures against crime. Because of this, never have so many people in the world been held in prisons. Let the numbers speak for themselves: Between 1995 and 2005 the population of Brazil grew 19.6% - the prison population increased a staggering 142.9%, or 7.2 times more.

And so the United States has found itself the home of the 2.8 million inmates, something unheard of on the planet. It was calculated that one in every 37 Americans is or has been in jail.

The question that I modestly ask is: Is the problem resolved? No. The crime rates in the United States today are virtually the same as in 1973.

The cost of this policy is astronomical: it is projected for the next four years an expenditure of $27.5 billion will be needed just to build and maintain prisons. The cost is so high that many U.S. states are reducing from 2,800 to 2,500 the number of calories of food served to inmates in order to save.

In Kentucky, the state prison has begun to charge prisoners per day to help with expenses - and how with even that said, the solution was to drop hundreds of those convicted of assault, kidnapping and trafficking of drugs. Other states resorted to the export of prisoners, a practice denounced last year by The New York Times. In other words, the system is broken.

Across the Atlantic, Britain experienced the failure of the same policy: its crowded prisons record 600 serious incidents each week, including deaths, assaults and escapes. There are prisoners sleeping in toilets, and plans to hold them even in some courtrooms. The lack of cell space is such that it has been suggested to build floating, cheaper prisons.

In 2006, The Times newspaper proclaimed the scandal of a pedophile who was released on bail due to lack of vacancies in the cells. Some British prisons, trying to reduce costs, are closing on weekends, leaving the prisoners to roam through the streets, as announced by the British government last year.

In France, the situation is not any different: the occupancy rate of the prisons is 124% - but in some places it reaches 200%. The result, as reported by Le Monde: "With the excess of prisoners, French prisons are on the verge of an explosion." Just last year, 105 prisoners committed suicide, and the early release of 10,000 convicts is already being planned.

In Switzerland, last year in the situation of the Geneva prisons was denounced, that with only 270 vacancies, they were housing 450 inmates and therefore setting the stage for scenes of violence and hunger strikes.

In Venezuela, in 2007 alone, 398 prisoners were murdered. In Bulgaria, 3,300 criminals were freed for lack of vacancies in the cells. In Zimbabwe, the government itself has admitted, 24,600 prisoners occupy 16,600 cells. In Spain, the newspaper El País recently reported increased tension in the prisons due to lack of vacancies.

In Colombia, in 2007, 600 people including 125 children, were isolated in a prison to protest against the lack of jobs and the bad conditions of the cells. In Russia 878,000 criminals are kept in overcrowded prisons and the situation reached a point where a guard was recently bitten by an inmate with AIDS.

In Canada, a dealer had his sentence commuted on the basis of the bad conditions of the prison. In China, despite all the death sentences carried out, 1.55 million people are crowded together in overcrowded prisons. Regarding Brazil, I believe it is unnecessary to address the status of prisons and the lack of cells.

The truth is that the idea that modern prisons have failed. It is necessary to put them aside for something new. Maybe it's time to further study the criminal and the concept of segregation, creating new types of punishment, treatment and prevention that relieve and preserve society, rather than overloading it further.

Pedro Valls Feu Rosa is the Brazilian Judiciary Chief Judge, Chairman of the Electoral Tribunal of the State of Espirito Santo.