Does America Still Have a Dream? 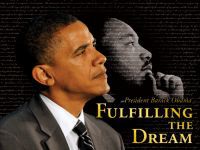 It didn't take long until massive critism and messages of hate started flowing like Niagara Falls. Nonsense about birth certificates and citizenship was being vomited by haters. Even impeachment was being discussed.

Only a few months in office as President, Barack Obama was being blamed for the terrible state of the economy and every thing else wrong in the nation: foreclosures, unemployment, etc. He was accused of imposing socialism since his directed campaign for health care was successful, accused again of bankrupting the U.S. economy so that U.S. citizens don't have to go without adequate health care.

Never mind that continuous wars of aggression and overseas bases were responsible for the sad state of the economy, the real reason the country is going broke with massive debt. But it's health care....yeah right.

Collective amnesia of the horror of the Bush years? Republicans made gains in the November elections with the prospect of throwing an anchor down for any progress the new President might try to achieve.

The hate and hypocrisy have reached such a proportion that finally it erupted in violence against a U.S. congressperson and other innocent bystanders in Arizona, where not only Obama Democrats are in the crosshairs of right wing extremist bigots, but immigrants.

So, it has to be concluded that rather than the election of this intelligent, capable person being a positive indication for his nation, it's just the opposite. They are using him as a scapegoat for all of their problems. It could be the last chance the country has before slipping into the abyss, but instead they are abusing the man daily with their rhetoric.

Perhaps someday the country will be such that a person can adhere to a conviction without being shot in the head. And an innocent black man minding his own business will not have to worry about being beaten, hung or shot by a bunch of racist fascists just because of the color of his skin. 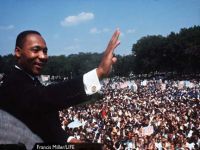 The seeds were planted by Reverend Martin Luther King, Jr. by his great words and his putting his own personal safety and well being on the line. His words are worth repeating again in the hope that the seed may yet produce.

"I have a dream that one day this nation will rise up and live out the true meaning of its creed 'We hold these truths to be self-evident, that all men are created equal'," In front of 250,000 people gathered at the Lincoln Memorial in the US capital in 1963, Dr King told gave his memorable speech. "I have a dream that my four little children will one day live in a nation where they will not be judged by the color of their skin but by the content of their character."

"Let freedom ring. And when this happens, and when we allow freedom ring-when we let it ring from every village and every hamlet, from every state and every city, we will be able to speed up that day when all of God's children-black men and white men, Jews and Gentiles, Protestants and Catholics-will be able to join hands and sing in the words of the old Negro spiritual: "Free at last! Free at last! Thank God Almighty, we are free at last!"