Christmas past and present

The history of Christmas Day and the celebrations around the world is very much a case of before, during and after....what? Good question. For a start Christ was not born in the year zero, neither did Christmas start with Christ. And Father Christmas? Yes, he did exist and he's Russian... 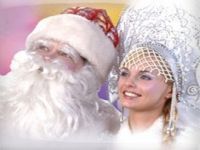 Think about it. In the northern hemisphere it makes sense to have a festive season around now. After all, the agricultural year died on November 1, after its death was announced by the bad spirits on Hallowe'en (the evening before the halos = Saints) on October 31. This was the first of the many Festivals of Light held in agricultural villages throughout the winter season, bringing people together, sharing resources and thus regulating the community.

It is also the time when the weather is colder, so it makes sense to slaughter and hang up the fattened pig, it is cold enough to wash the intestines in the river, cut up and season the meat for the sausages without interference from flies and it makes sense to use the chimney to smoke the sausages and salted hams. It also made sense to slaughter the animals at a time when there was less for them to eat. It was a time when salt played an important part in the family's survival (hence the word salary, part of the wage being paid in salt) to place the rest of the dismembered pig in layers in a chest full of salt.

Therefore it comes as no surprise to learn that thousands of years ago, people were celebrating the Winter Solstice (the shortest day on December 21). Yule (from the Celtic word hweol, wheel, indicating a change of seasons) was a 12-day festival celebrated from December 21, when large logs were lit in the center of the village and the people would feast until the fire died out (usually after twelve days). They would hit the logs with sticks and the sparks that flew out represented the cattle that would be born the next year.

When the Roman civilization spread throughout Europe, forming the first European Union (yes, it disintegrated), the Roman festival Saturnalia, in honour of the God Saturn, the God of Agriculture, was celebrated, this beginning the week before December 21 and lasting for a month, again a time of eating and drinking for the same reasons.

New Year was not celebrated at this time, however. It was a period of darkness when agricultural activities were at a minimum and during which agricultural societies had to regulate themselves, coming together at regular intervals to check on how things were going. New Year was a fertility festival celebrated during the planting season, the resurrection of new life (Easter, after the Pagan Goddess of Fertility, Eostre), Carnival (Shrove Tuesday or Mardi Gras) being a transition festival between the Festivals of Light in the winter and the forthcoming sowing and planting season.

Now we come to the birth of Jesus (real name Yehosua in Hebrew or Yesua in Hebrew-Aramaic, meaning Yahweh delivers, or rescues) Christ (from the Greek Kristos, the anointed by God). It was not in the year zero. If King Herod of Judea had ordered the slaughter of males two years old and younger, alerted by the Wise Men (Magi) that a Messiah (leader of the Jewish people) had been born, and if King Herod died shortly after the lunar eclipse of March 13, 4BC, then the earliest Jesus could have been born was 4 BC.

As for the Wise Men and the Star of Bethlehem, it is quite possible that there were more than three and they were not kings, but Zoroastrian astronomers from Persia, who spent their lives studying and interpreting the stars and who would have taken any sign from the Heavens very seriously. There are a number of contenders for the Star, namely Halley's Comet (12 BC), another unnamed comet in 5BC, the conjunctions between Jupiter and Regulus between 3BC and 2 BC and Jupiter and Venus on June 17, 2BC. However, Herod was by then dead.

It was the Wise Men who told Herod that they had seen a sign, which they interpreted as the advent of a Messiah. Whatever happened back then had to survive centuries of indoctrination from the Catholic Church, and since the early Christian Church was afraid that astronomy and astrology was a threat, it would have made sense to transform he "magi" (astronomers) into "Kings" and probably reduce a group of twenty or thirty to three, giving them names ad mentioning the gifts they brought to Jesus to justify the story.

If Jesus himself was giving lessons in the Temples when he was a small boy, it would appear that he was no poor son of a simple carpenter, specially since the Gospels of Matthew and Luke both trace his lineage back to King David. His trade, "tekton" in Greek, means simply "craftsman", be this of stone or wood or metal, and "carpenter" may have meant a simple artisan or the owner of a business empire importing or exporting construction materials from the entire region - certainly wood would have been the most valuable of commodities at the time. Whether or not he was the father of Jesus is unclear; one version states that Mary became pregnant while they were engaged and he married her anyway, despite knowing the child was not his. His being a simple carpenter does not explain how Mary later in life had a house in what is Turkey today.

Early Christianity implanted itself in Pagan areas through a fusion of symbology. For example, the Pagan tradition of worshipping the fir tree was transformed into the Christmas tree representing the Holy Trinity, Father, Son and Holy Ghost; the Pagan Winter Festivals were then tailored by the early Church to represent the Festival of the Nativity (hence the Nativity Scene). Pope Saint Julius I (Pope from February 6, 337 to April 12, 352) chose December 25 as the Nativity Day (birth of Christ) although some texts refer to his birth around Easter time (April), which would also have suited the Resurrection/New Life symbolising the birth of the new (agricultural) year.

December 25 would have been near enough to the Winter Solstice to have the same result, namely educating the Pagans towards Christianity, exchanging the cause but not the effect. The date also coincided with the Cult of Saint Nicholas (SAiNT niCHoLAS = Santa Claus), hugely popular in the East by the time of his death on December 6, 343 AD (December 19 in the Julian calendar).

Saint Nicholas was born into a wealthy family in the village of Patara and from a young age, his Christian values taught him to live a life of austerity, using his wealth to care for the poor. So many were his actions helping people by distributing wealth that he became famous through the East while still young and was appointed Bishop of Myra. Therefore the transition from Saint Nicholas to Santa Claus.

But who was this bearded gentleman? Why, Saint Nicholas merged with the traditional white-bearded Russian figure who distributes presents at this time of year, Ded Moroz (Grandfather Frost), accompanied by his grand-daughter Snegoroushka. Oh, and the Coca-Cola campaign of 1931, dressing him in the company colours, red and white.

Truly, we can conclude that the festivity and the figure are international and global values of goodwill and doing good, helping the poor (charity) and having good thoughts at a time when people are vulnerable. The very best of the human spirit.

The Pravda.Ru editorial team takes this opportunity to wish all of our readers and their families all the best for this Christmas Season and for the New Year, hoping that 2011 brings you all the very best of what you wish for, the fulfilment of your dreams, or at least the foundations for these to come true.

Whatever our differences of opinion throughout the year, however hot our debates and discussions, remember we are all brothers living around a common lake, the sea.